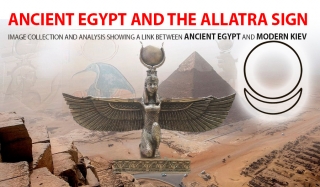 Ancient Egypt and the AllatRa sign – a circle and a crescent. Image collection and analysis

In the year 2016, plenty of publications dedicated to Ancient Egypt appeared on our website, probably not by mere chance, if we take into account the earlier mentioned enigmatic prediction regarding the head of Osiris – a special relief outline in Kiev City geography. Today I would like to extend the subject and try to draw a parallel between Ancient Egypt and modern Kiev or, to be more precise, between the remote age of the Pyramids construction and our days when Rigden Djappo brought the Primordial Knowledge. As many of you have guessed, we will discuss the AllatRa sign that we wrote about earlier in the analytical research article The AllatRa sign. A circle and a crescent. Let me refer to the prehistory: the AllatRa book contains several pictures suggesting that the circle-and-crescent sign was revered in Ancient Egypt in the times of several pharaoh dynasties in various millennia.