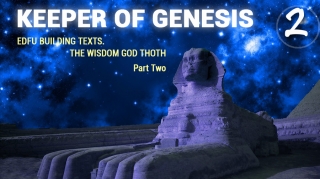 The Temple of Edfu in its present form was erected over a two hundred-year period between 237 BC and 57 BC, but incorporates parts of much earlier structures dating back to the Pyramid Age (for example, portions of the inner and outer western enclosure wall). Moreover, like all major temples, it was built “on hallowed ground” and there attaches to it a recollection of vast antiquity and of momentous antecedents.