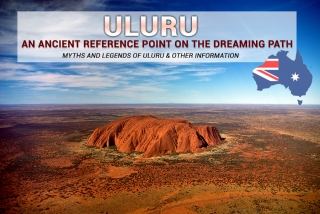 Uluru: an ancient reference point on the Dreaming Path

This research is dedicated to the mysterious mountain of Uluru (Ayers Rock) in Australia. Besides the remarkable beauty, this place is full of unsolved riddles. The sacred mountain Uluru is a unique sandstone rock formation the origin of which is still disputable, a huge monolith lonely dominating the desert for tens of kilometres. Manifestly standing out against the background of the surrounding scenery, it is visible not only from the ground, but from space as well. Moreover, it is not a mere rock, but a summit of a giant stone “iceberg” going deep down into the earth. It can outlast any cataclysms, and even a direct fall of a large asteroid cannot move it from its place.