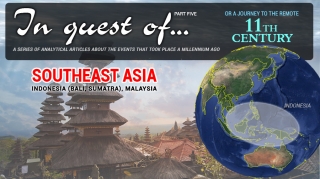 If you remember, in the previous Part Four of the In quest of… series, like pathfinders we were following traces of the unknown glorious seafarers who had fearlessly furrowed the immense Pacific Ocean with a certain clearly defined purpose as I believe. I cannot say with confidence whether it was an accidental concurrence of circumstances or rather a result of an implemented great spiritual plan that remained in traces of ancient cultural monuments on Easter Island and in Polynesia. Somebody may regard it as mere coincidence that the historical period of the 10-11th centuries AD which we consider in this article series was marvellously and simultaneously imprinted in North, Central and South America, as well as on legendary Easter Island and a bunch of other PacificIslands, having given birth to advanced civilizations and cultures.