…Thus Gabriel came to our Prophet,
Having assumed the shape of Dihya.

By the body he was a man, just like you and I,
But in spirit he was the dweller of the heavenly height.

And the all-knowing Prophet could clearly see
The angel in that man.

Yet, does this mean the leader of spiritual forces,
The invisible angel was a human being?


I am just a human, and no one else,
But the superior spirit is joined with me.

Oh, I wish you had the bliss,
Recognize the spirit in my simple body,

Not expecting rewards and not fearing fire!

In other words, if translated from poetical to common everyday language, Archangel Gabriel himself (who is called Angel Jibrail in Islam) came to Prophet Muhammad. However, most people don’t fully understand how exactly he came? The official opinion of the religious institution can hardly explain this point in an understandable manner, while the famous Sufi poet Umar Ibn al-Farid, in his unique poem that has been miraculously preserved until today, says that ARCHANGEL GABRIEL CAME IN A HUMAN BODY! This is clearly stated in the following lines of the Poem of the Sufi Way:

By the body he was a man, just like you and I, but in spirit he was the dweller of the heavenly height.

And the all-knowing Prophet could clearly see the angel in that man.

The next question: who was Ibn al-Farid, generally speaking? Here’s information about him, taken from available internet sources:

Umar ibn `Alī ibn al-Fārid (1181-1235) was born in Cairo. His father moved to Cairo from his native town of Hama (Syria) prior to Umar’s birth. According to different sources, his father was a respected farid (an advocate for women’s causes) or engaged in 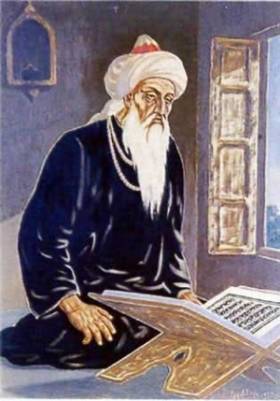 allocation of shares (furūḍ) in cases of inheritance. The father taught Umar fundamentals of Shafi'i school (one of the four schools of Islamic law, which predominantly relies on the Quran and Hadiths for Sharia, and follows moderate, compromise views). Later on, Ibn al-Farid joined Sufism. Possessing an outstanding appearance by nature, he preferred to remain single and secluded himself on slopes of the Mokattam Mountain near Cairo for long periods of time, communicating with wild animals only, performing ascetic practices and falling into reflections. After the death of his father, near whom he stayed for a certain while, having interrupted his hermitry, Ibn al-Farid returned to ascetic life and travelled in search of the truth. He spent about 15 years in Mecca, where he wrote most of his works. He left no treatises on Sufi theory or practices, but his verse heritage collected later on by his grandson Aliy is a true gem of Arabic poetry. His poetry is totally Sufic, and he’s considered the greatest mystic poet among Arabs. Several of his poems were composed in ecstasies.

Already during his life al-Farid had a reputation of a wali (saint). He returned to Cairo, being a respected and earnest minister of religion. He delivered sermons in Al-Azhar Mosque in Cairo, which sermons were frequently attended by Egyptian sultan al-Kamil who called Farid to his court, promising to make him the supreme judge of Egypt. However, Ibn al-Farid rejected such career and preferred to penetrate the depth of spiritual truth. His most famous works are the Wine Ode and the Poem of the Sufi Way, the latter consisting of 760 verses.

Being a delicate, impressionable person who never digressed from ascetic canons, Umar Ibn al-Farid aspired to achieve the state of

unity with God (vahda). In order to gain such state, Sufis seclude themselves from the world, mortify their flesh, and practice Dhikr

(Zikr), i.е. repetition of certain formulas and words, sometimes accompanied with music and dancing. This ritual helps one to traverse the pass (Tariqat) to the final state of Fanaa, in which a Sufi gets a revelation (Kashf), and his eyes are lit up with the vision of the Truth. An amorous coition between the loving and the Beloved (God) takes place. All poems by Ibn al-Farid are penetrated with the theme of passionate love in which the loving one loses his self. Not taking any food for several days, Farid ecstasized, listened to heavenly voices, and wrote his poems in such state. He was definitely the first of Sufi poets who expressed in poetry the esoteric and mystic experience of a person on the way to sanctity.

WHAT CONCLUSIONS CAN BE DRAWN?

Conclusions are straightforward. If a historical literary text contains a mention of coming of Archangel Gabriel (Angel Jibrail) in a human body, it is totally possible He is in front of us again.