Shattering all and any intrigues, we shall express our view at the very beginning, in order to depart from it. Today, we have all grounds to assert that Igor Mikhaylovich Danilov and Imam Mahdi (“the Guiding One”), the latter being the Messiah expected by the Muslim world, often mentioned in Prophet Muhammad’s sayings, and in some sources associated with Prophet Isa (Jesus) heralding the Judgement Day (Qiyamah) approach, are ONE and the same PERSON.

Building the evidentiary base, let’s summarize its following contents:

1. Signs recounted in the Hadith and associated with the advent of Messiah (Imam Mahdi)

1. SIGNS RECOUNTED IN THE HADITH AND ASSOCIATED WITH THE ADVENT OF MESSIAH (IMAM MAHDI)

It is known that Muslims in the whole world are impatiently waiting for Messiah / Saviour appointed by Allah. First of all, let’s briefly explain that the Hadith is a collection of traditions containing sayings and deeds of Prophet Muhammad, which traditions were transferred from generation to generation, often verbally, and thus reached nowadays with certain probable discrepancies and distortions. We shall refer to the Hadith we’ve discovered, relating to the momentous event of two eclipses within one (ninth) calendar month, signifying the coming or emergence of IM (Imam Mahdi).

There are two evident signs of the emergence of Mahdi…, one of them is that on the first night of the month of Ramadan a lunar eclipse will take place, whereas the second sign is a solar eclipse in the middle of Ramadan. (El-Kavlu'l Muhtasar fi' 'Alamatil Mehdiyy-il Muntazar, page 47)

During his supremacy, on the 14th day of Ramadan a solar eclipse will take place, and on the first night of the month there will be a lunar eclipse... (Mektubat-i Rabbani, Letter 380, 2/1163)

Before Mahdi’s emergence, within one month of Ramadan the Sun will be eclipsed two times. (Death, the Judgement Day, and Signs of the End of Times, page 440)

...a solar eclipse in the middle of the fasting month and a lunar eclipse at the end of the month... (Kitab-ul Burkhan fi' 'Alamatil Mehdiyy-il Ahir Zaman, page 37)

The advent of Mahdi will be the cause of two lunar eclipses in the month of Ramadan. (Signs of the Judgement Day, page 200)

Based on the aforesaid Hadith, Islamic theologians summarize and share a common opinion that the following events will be distinctive signs of Mahdi’s advent:

Let’s look into the aforesaid events. The Hadith refers to Ramadan, the ninth month of the Islamic calendar. It is generally known that the Islamic calendar is a lunar calendar, therefore every year the sacred fasting month of Ramadan starts on totally different days (similar to “floating” calendar day of the Christian Easter). At that, in all fairness we should state the beginning of Ramadan mostly occurs in the middle of summer (June-August).

However, let’s assume for a minute that Imam Mahdi is really Igor Danilov who has brought into the world the lost knowledge of the human nature and the Soul. At the turn of the millennium, Messiah has come to the secular world in a physical body of a Slav personality. Unfortunately, we have failed to find out His exact place of birth, although rumours say is was Russia. During the last decades He has been living in the territory of Ukraine. Based on the indisputable fact that in the current incarnation His personality is subject to the Gregorian calendar, which is traditionally applied by all Slavic nations, it would be totally logical to compare the Islamic and Gregorian calendars.

In such case Ramadan as the ninth month corresponds to the ninth month of the Gregorian calendar, i.e. September. We hope dear Muslims will forgive such comparison, for we permit ourselves to do this not in order to create a false speculation, but for the great and righteous purpose of giving a hint to the multimillion assembly of true and faithful servants of Allah, who are impatiently waiting for the advent of Mahdi. 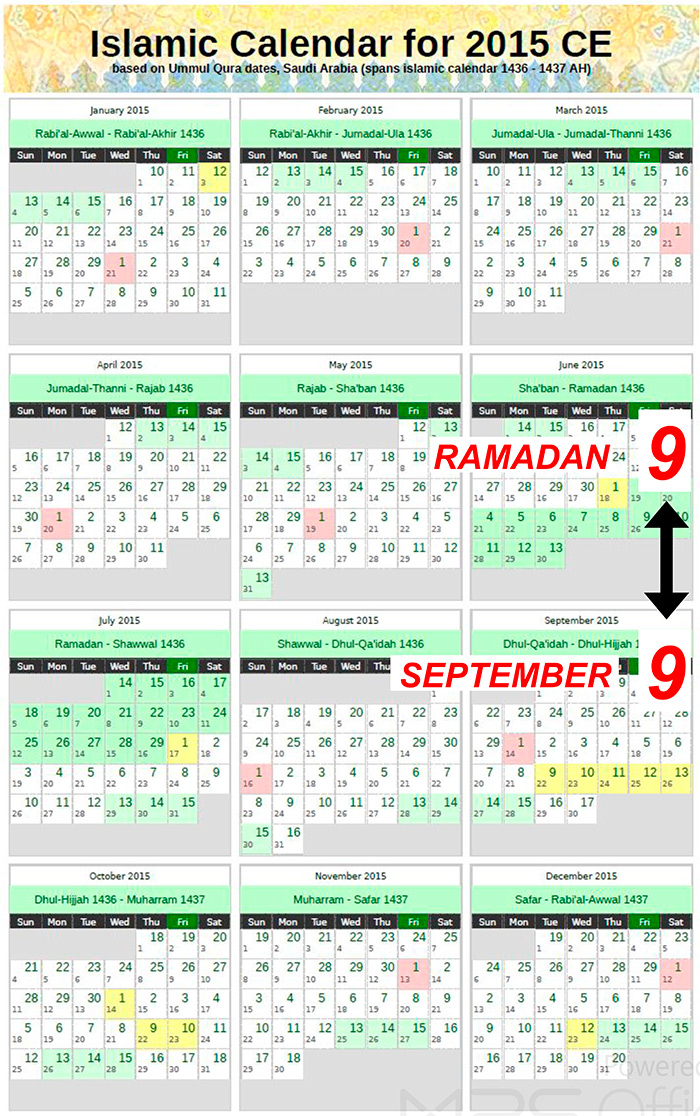 Having followed such comparison, we’ve obtained the month of September of the year 2015. Yet, what is so special about September 2015? First and foremost, there were two eclipses that occurred with a time gap of 15 days: a solar eclipse and a lunar eclipse. When the initial version of this article in Russian was being composed, our planet entered “the corridor of eclipses” between 13 and 28 September, which astrologers called “reloading”.

...a solar eclipse in the middle of the fasting month and a lunar eclipse at the end of the month... (Kitab-ul Burkhan fi' 'Alamatil Mehdiyy-il Ahir Zaman, page 37)

What do the prophecies mean by saying “eclipses will recur”? On 14.09.2015, NASA officially announced the double solar eclipse had taken place the day before, in other words “the eclipse recurred”. In this respect, there is the Hadith stating:

Before Mahdi’s emergence, within one month… the Sun will be eclipsed two times. (Death, the Judgement Day, and Signs of the End of Times, page 440)

Hence, nowadays we observe the astronomic manifestation of the prophecy coming true.

According to Shiite theology, “Muhammad’s successor” is an impeccable human personality who not only governs the community with justice, but also has the power to preserve and interpret the Divine Law. Yet, the most interesting point is that He lives in secret, and so He is called “the Hidden Imam”.

The Hadith says people see Him just like He sees people, but they don’t recognize Him.

As far as we know, prior to September 2015 Igor Danilov lived in the secular world almost incognito, neither announcing himself in mass media, nor organizing any training groups, ashrams or spiritual development centres. it is significant that the global community obtained the Primordial Knowledge via books written by mysterious writer Anastasia Novykh who also lives in the world incognito. The Knowledge brought to the world is recounted in A. Novykh’s Sensei-I, II, III, IV, The Crossroads, Ezoosmos, Birds and a Stone, and the last, most fundamental book AllatRa. Moreover, there are reports composed by international groups of scientists and available on the internet for global community’s review: On the Problems and Consequences of Global Climate Change on Earth and thePRIMORDIAL ALLATRA PHYSICS. All information is publicly posted and can be read or downloaded from open sources. And, by the way, everything can be downloaded totally free of charge!

At the end of August and two times in September Igor Danilov was first publicly interviewed by mass media, in other words, “he announced himself” (which complies with the Hadith). 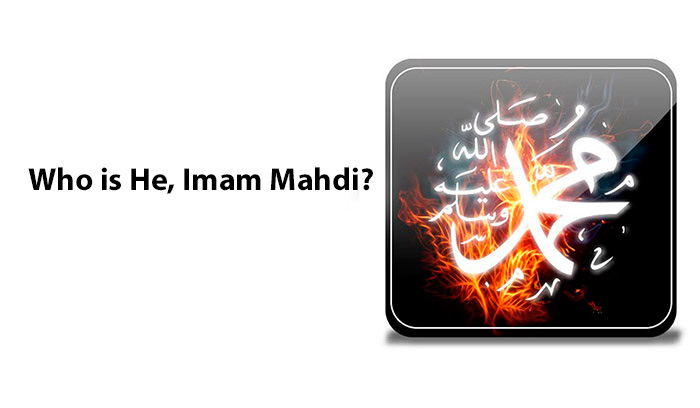 4. OTHER HADITH REFERRING TO SIGNS OF AL-MAHDI’S ADVENT

In conclusion of the article, we would like to recommend you once again to watch the three epoch-making interviews (A Frank Dialogue about the Most Important, The Meaning of Life: Immortality, and UNITY) and endeavour to feel, EXACTLY TO FEEL: Who is in front of us on the other side of the screen? It’s up to everyone whether to believe or not, and no one is entitled to deprive a person of his/her own choice. At that, those who are truly impatiently waiting and ready to hear Mahdi’s call, already today can become aware that the Judgement Day indicated in prophecies has come. Whether Imam Mandi will lead us to the bright future, return what is lost and restore Islam in its initial purity, will depend on all of us, dear readers, brothers and sisters. 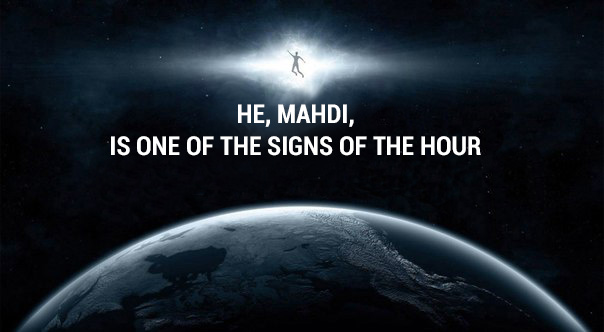 In the name of Allah, the Most Gracious, the Most Merciful, who has sent His sign to us, those who write these words, we address all Muslims of the world: please, hear His voice!

The voice of the great Imam Mahdi...