The Shiite prophecy of the Hidden Imam is coming true!

In Sunni Islam the subject of Imam Mahdi is not elucidated as widely as in the Shiite branch of Islam. Let’s remind to our readers that Sunnism and Shiism are the two major denominations of Islam, established in order to separate and cause contradictions between followers of Prophet Muhammad’s Teaching.

So, in Sunnism the Advent of Mahdi is not awaited so much, but Shiites have it totally differently. They believe Mahdi is the hidden, long-expected 12th Imam. He has been in concealment until the hour appointed by Allah, and at the appointed hour He will come to the earth to guide Muslims and give the Knowledge on how people should establish a kingdom of justice and prosperity.

According to Shiite prophecies, Imam Mahdi who left for the Keib (concealment) a thousand years ago must come out of it and arrive during the period of Kiyama. The most interesting thing is that Saint Agapit of Pechersk in whose body Archangel Gabriel came last time lived exactly one thousand years ago. Such coincidence may seem accidental to someone, but we prefer to state bare facts, whereas conclusions are to be made by everyone independently. 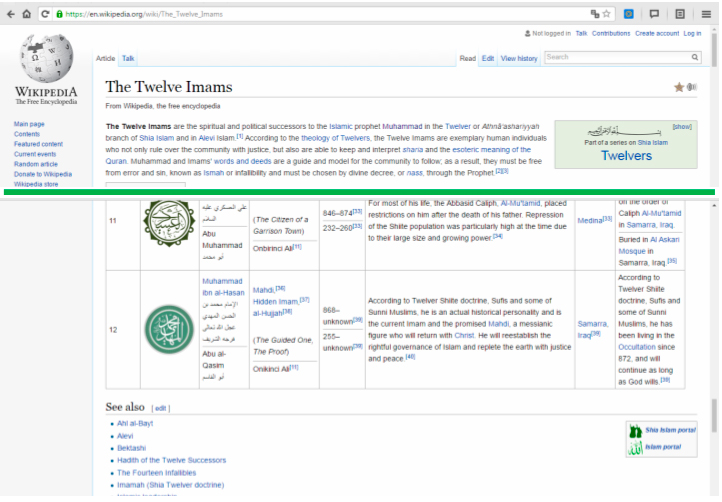 However, let’s go back to the prophecies of Shia Islam themselves: He will bring good to humanity. He will find the hidden treasure of the earth and fairly distribute it among all needy. He will teach modest living and subtle reflection. He will make people understand that dignity is an inner state residing between two extremes and based on equality and justice. He will restore the Holy Koran teaching and the Holy Prophet’s traditions after the period when the world will ignore them and live in lechery, discord and wars. He will protect science and supreme knowledge, and will use them. He will have a total control over that. He will value supreme knowledge and use it always respectfully. His mind will be free of desire to harm humanity. When He comes, the supreme knowledge will be like a property which has been misused in the past, but which He will now permit to use again correctly. (Hadith by Abu Davud, Nadjul Balaga, Khutba 141, 187 – Shiite Islam)

Numerous facts indicate today that Imam Mahdi is already in the secular world and His mundane name is Igor Mikhaylovich Danilov! This news is certainly the most unique sensation of our times, since Archangel Gabriel comes to the Earth in a human body once in millennia. Total coincidence of Shiite predictions with the fact of Archangel Gabriel’s sojourn becomes apparent, if one delves deeply into the issue. Yet, let’s go back to the prophecies again.

Hadith texts also tell about the signs of this momentous time. Here are some extracts:

The Doomsday will approach, when tall houses are constructed...

The hour won’t come until these Hadith are fulfilled… People will compete with each other in construction of high-rise buildings.

The Doomsday won’t come until these events take place… The time will grow shorter, and spaces will shrink. Prophet Muhammad said:

Sings of the Judgement Day will come true one by one like beads scattering from a necklace.

Hardly anyone of contemporary people has failed to notice the time acceleration phenomenon in recent years, when a day consists of the same number of hours and a week consists of the same number of days, though they fly by like an instant. The point is that in the last decades time has accelerated by 15 %. Here’s another remarkable Hadith where such special period of time is mentioned. Allah’s Messenger says:

“This won’t be a fight with polytheists. You will kill each other.” People asked: “And will we be of sound mind?” He answered: “Most people of that time will be out of their mind, only a few will still have it. Very many people will consider they are right, though in reality they will be far from the truth.

Every sensible person who rationally evaluates what’s happening around can receive evidence that the signs are coming true. This means the entire humanity is on the brink of choice, and the humanity’s future will exactly depend on what kind of choice it makes.

And so the greatest trouble is coming. On that day man will recall where he’s been zealous, and Gehenna will rise before the eyes of those who see it. The abode of those who have violated the permissible and preferred this life will be hell. Whereas whose who feared to appear before their Lord and kept their soul from passions will have refuge in paradise. (Sūrat an-Nāziʻāt (“Those Who Pull Out”), Ayats 34-41).

Today, the very fact of the presence of Archangel Gabriel or Jibrail Himself in the secular world, whose advent was promised as the advent of Imam Mahdi (the term Mahdi means “Guided by the Truth”), indicates this time is unique and inimitable. Hence, the entire humanity today has a chance to build a society in accordance with the Teachings of all Prophets whose activities were actually a preparation for the current stage of civilization development. By our choice we can demonstrate how strongly we love and value their righteous and godly deeds.

MAY THE ALMIGHTY ALLAH, THE MASTER OF DEATH AND RESURRECTION, HAVE MERCY ON ALL OF US AND GRANT THE VICTORY TO IMAM MAHDI OVER DAJJAL, AND MAY HE HELP ALL PEOPLE TODAY TO GAIN WISDOM AND UNDERSTANDING, AND MAY HE OPEN THE SOULS, EYES AND EARS OF EVERYONE, AND MAY HIS NAME BE GLORIFIED FOREVER! AMEN!