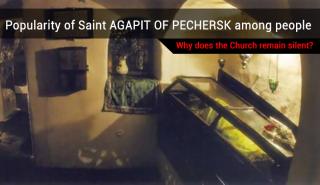 Agapit of Pechersk, the Unmercenary Physician. Interest to this historical personality is growing as the years go by, and his image is accumulating secrets and miracles, tidings about which are spreading all over the globe. Who was he? A doctor? There have been many doctors at all times, including nowadays and the times of Reverend Agapit’s life. A saint? There have been plenty of saints in all parts of the world. A monk? Monks have never been a rarity in our land. At that, a crowd of pilgrims comes exactly to the shrine with Reverend Agapit’s relics, and there are millions of people in that crowd every year. It’s difficult not to notice this. Thus, our desire to get at the heart of the matter is totally logical.