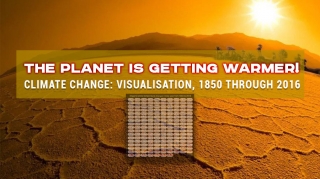 The planet is getting warmer! Climate change: visualisation, 1850 through 2016

It is difficult for many of us to realize the reality of the accelerating global climate change on the planet, and alarming notices seem especially unlikely when there is nice September weather outside. At the same time, I totally understand plenty of messages are spread nowadays in order to frighten people, and whichever way we look there are warnings: attention, beware, danger! – of which we are already so tired. While preparing this material, I would not like to become similar to unconscious conductors of the Animal Mind System who intimidate the population by approaching terrible cataclysms, however, unfortunately, it’s very unwise to underestimate the situation as well.