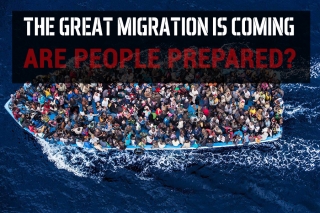 This analytical article only hints at possible global all-human shocks to take place in the nearest future due to the beginning of planetary natural cataclysms and the great migration of peoples. Today, there are both supporters and opponents of troubled warnings: the former monitor the aggravating climatic situation in the world, draw conclusions and attempt to sound the alarm, whereas the latter are persistently unwilling to notice anything and turn their backs on the problem, suspecting somebody of “having dividends” on the panic. As for me, since I am the editor of www.rgdn.info and regularly let enormous strata of relevant information through my consciousness, I surely belong to the former. And this is exactly the reason why I’m preparing this new material.