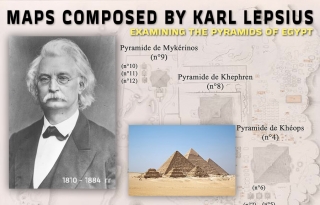 This is an addition to the article Pyramids of the world: Part 1. Egypt. The Orion constellation, regarding the “star map”.

The extraordinary Wikiwand, full of interesting information, has pleased with the Lepsius list of pyramids. Karl Lepsius was a prominent Prussian archaeologist who visited Egypt in 1842 and composed a list of all the monuments of ancient architecture that he saw on his trip. Below there are maps drawn by Lepsius where relevant Egyptian pyramids are marked, and here is the list itself with information on the pyramids: https://www.wikiwand.com/en/Lepsius_list_of_pyramids.