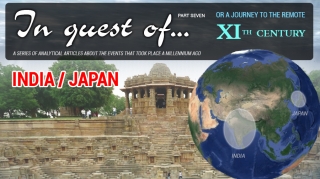 In quest of... The 11th century. India, Japan. Part Seven

Continuing our search of the radiant traces left on the Earth by our remote ancestors in the 11th century, we have now arrived to India. This land is said to be the cradle of the human race and speech, the mother of history, the grandmother of legends, and the great grandmother of traditions. Hindu culture formed of various historical epochs, customs, traditions and ideas, including those of invaders and immigrants. Many local customs, features, languages, monuments, etc. are referred to as examples of such centuries-old cultural blending.