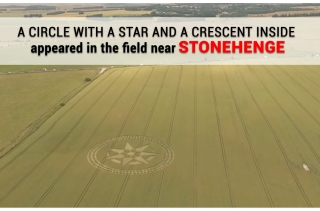 Every day new interesting events take place as hints or indicators. They are open to everybody’s eyes, but what a person sees depends solely on such person and the contents of his or her inner world and aspiration to explore oneself and the world where he or she resides. A new extraordinary pattern appeared on 8 July 2016 in a wheat field in immediate proximity to the ancient megalithic site of Stonehenge in Wiltshire County, England. We won’t make any assumptions on how such crop circles emerge, since there are already plenty of relevant hypotheses available to anyone who wishes to know more about the subject. Let us only draw your attention to the pattern itself, taking into account there is an opinion every crop circle is a sort of a message, prediction or warning.