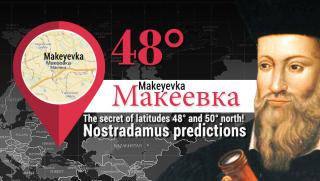 The ball comes to the player, as they say! The team of independent analysts sincerely thanks everyone who has joined investigation of the issue so important for the entire humanity! Incredible coincidences between present-day facts and predictions by Michel Nostradamus within the framework of our investigation, as described in the article The 50th degree of spiritual Freedom, surprised many people who are in search of the truth. As a supplement to the published material, our readers have sent us two more extracts that we can’t neglect. Here is the first one:

At the beginning of the third millennium, ancient faith will be revived to the north of latitude 48° and unite the nation. These northerners are powerful by their nature, and only alien religion separated them.