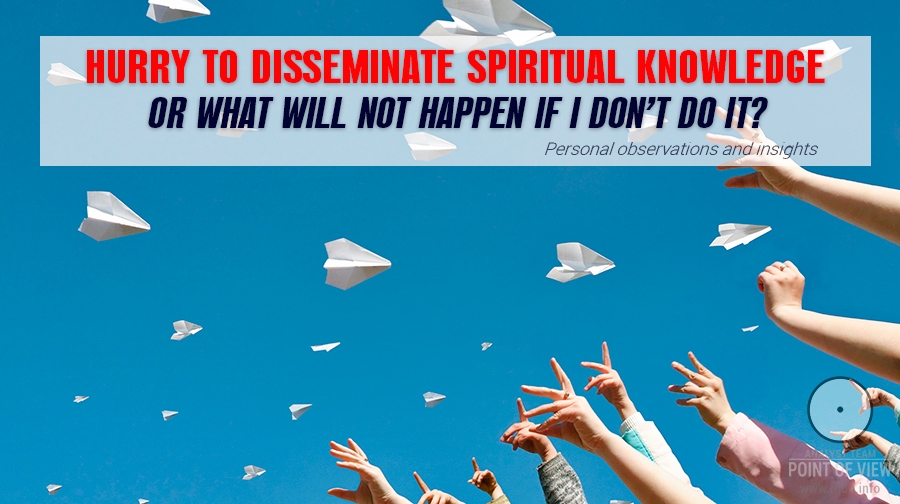 At first glance the above questions might seem mutually exclusive; nonetheless they are totally correct and help to reveal the true message of actions taken. I addressed them many times during the last several years. And I want to do it again in order to resolve my doubts whether I should share the Knowledge contained in the books by Anastasia Novykh with other people around me.

Why have such doubts appeared at all? Simply because a heated dialogue took place inside me. My feelings stated the Knowledge is necessary for people and can assist them in acquiring the Truth. But the tedious voice in my head evoked doubts whether I should openly share the innermost, saying it’s inappropriate and might cause loss of certain contacts and even diminish the authority of my ego in other people’s eyes…

Well, I’ll try to examine my thoughts by means of my favourite tool.

What will happen if I share the Knowledge given in Anastasia Novykh’s books on my page in social media, in personal communication with friends and acquaintances, and in articles I write for the AllatRa Journalism project?

Someone might possibly take this information into account for their further search, just like I once took into account a commentary under a political video where a girl thanked her interlocutor for recommending Sensei of Shambala book for reading. The girl was wondering at the fact that someone in such community was reading books about Sensei, and something clicked inside me. Owing to that tiny thread, that little hint, I arrived at the Knowledge. And others might do just like me.

What else? People might regard me at least as an odd person or even as s sectarian. Yet, pardon me, is there anyone on the planet who has no oddities of such kind? One should just look at the news line in VKontakte social network to see how many “medical cases” are there. People publicly expose themselves as out-and-out bitches, ardent politicians, philosophers or followers of various esoteric systems and movements. There are thousands of people like that, and it’s no surprise for anyone. The entire world is a big and noisy theatre.

Once it happened so that I “dropped” from my habitual environment for quite a long period of time. Put simply, I went on maternity leave which became an eye-opener for me. Previously I had thought that work would stop if I leave the office; that my university friends and business colleagues would be unable to cope with everything without me. I used to be in big companies who jointly attended bars and night clubs. I had to change cell phones regularly, because their memory was overloaded with contacts…

And then I left. So, what? Other people continued doing the job in the office. I finished my university studies, and our student company came apart as if we had never been together. Absolute majority of people, who had needed me so much before, lost any interest in me once I stopped bringing them certain benefits. Only a few remained with whom we did not owe anything to each other, being able to simply stay friends with no alcohol and mutual “figs in pockets”.

I guess with the rest of my “friends” we just failed to maintain true spiritual communication and mutual love (in the primordial meaning of this word). In the daily whirl of “especially important” affairs imposed by the material world we simply forgot to “recover our breath” and have a heart-to-heart talk. Discussion of work issues and bosses, gossiping, alcohol and night clubs hardly favoured any spiritual relations…

The only place where I still have a “crowd of friends” from the past is the Friend list in VKontakte. These are people with whom I used to communicate, and now I just can’t bring myself to delete them. What if a person will feel hurt? Or what if we will once stand each other in good stead?

We will! I can tell these people about the Knowledge. And I don’t care if anyone of those with whom we haven’t actually seen each other for several years will think something wrong about me. True friends will never think wrong, and if they doubt they won’t feel shy to ask.

My task is to tell, and it’s up to everyone whether they will apprehend the information or not.

Even my modest experience of sharing information about Anastasia Novykh’s books shows that none of those who have really read the books has remained indifferent.

The call to action given in the books encourages people to unite and to manifest sincere love for their neighbours. After reading the books you understand the illusiveness of the world around and the urgent necessity to change it, so that people open their eyes and start living as true Humans instead of struggling to cope with numerous perpetual desires of matter.

Sharing knowledge does not mean one should aggressively impose his or her opinion on each and every person. Not at all! But it’s totally real to be an example, to remind, to quote, to write and to tell about one’s own experience.

What will not happen if I start sharing? When you turn on the light, darkness dissipates. If owing to dissemination of the Knowledge there will be less ignorance in the world and more awareness in people, sharing is definitely worth it.

What will happen if I don’t do it? I will deprive myself of a chance to do what my Soul ASKS me to do.

Moreover, I will probably limit someone in his or her chances to choose... If stars are lit, this is needed for someone. And if an idea of an article comes to a journalist, somebody probably needs such article. There are no accidental texts or needless posts. The question is different: by Whose Will is one or another action taken?

Owing to the received Knowledge I now understand to whom “voices” in my head belong. And I know for sure that I need to trust deep inner feelings coming from the Soul.

No miracle will happen.

There won’t be a miracle of true spiritual communication when you KNOW you have nothing to argue about with your interlocutor, and your interlocutor KNOWS the same; when you simply enjoy conversation and joint activities.

There won’t be a miracle of human unity and constructive work for the general benefit, when all conventional borders between people and nations collapse, and FRIENDSHIP WITHOUT BORDERS becomes possible.

Perhaps, I could silently perceive the Truth within myself and hide what I know from people around, fearing their reaction. However, do I have such right now, in the Crossroad time, when the entire world’s destiny depends on the choice of every individual? A tiny screw in a huge mechanism can thus cause collapse of the entire system …

In my opinion, this would be same as discovering an inexhaustible source of life-giving water in the period of major drought and hiding it from others due to fear of their disbelief.

Well, the majority might not immediately believe in the Knowledge, but certain individuals will move towards the source and eventually lead others by their example.