Since a certain point I started noticing a very interesting pattern in how the system operates in close liaison with my animal nature. Everything begins with something little as usual. The system brings up some trouble, e.g. a problem at work or at home. And I stupidly take this program and load it into my head. Thereafter a real phantasmagoria commences: problems and troubles start falling thick and fast on all sides.

Thus, an unlucky streak in life begins, as they say. Work turns difficult and strained, discords are at home, kids play up, other drivers cut in front of my car, money melt away, I get sick, and whoever I talk to are bad for some reason. Yet, most significantly emotions are pouring down as though from a pail: fury, resentment, despair, fear, i.e. all “delights” of the Right Aspect’s uncontrolled activity. And I’m thinking: “What is going on around me? No, there is nothing good to be expected here. Let’s move to God, only to God!” And I start building a defensive front. Here, I would like to draw attention to a little detail which helps me personally a great deal. You get a good result when you don’t try to fight the coming thoughts, but simply STOP FEEDING THEM WITH YOUR ATTENTION. Thoughts get no power, and instead the power is invested in feelings. At that, a mini-dialogue takes place with every coming thought, which lasts for fractions of a second, and the whole sense of which is no dialogue in fact))).

I might be putting it a bit intricately, but the dialogue sounds roughly as follows:

Generally speaking, when every new thought comes I have a single picture for it: 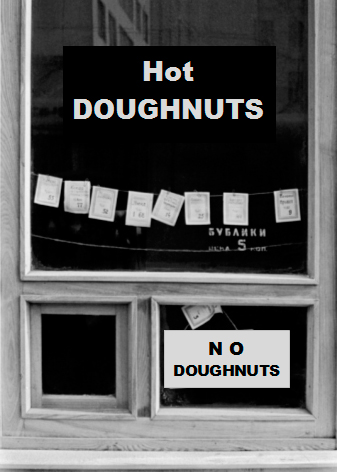 At least, such approach helps me to get rid of the pushiest thoughts. Even when I do like this for a little while, everything changes right away, because all the aforesaid problems become not mine, and all troubles stop having any relation to me. It makes no difference what happens outside when everything is wonderful inside me, doesn’t it? This is similar to watching a heavy shower behind the window. Certainly, it would be better if the sun was shining, but the rainy weather is not bad either. What’s the problem if it rains outdoors? Inside, at home it’s warm, light and dry. However, changes take place not just inside: the world around me changes as well, and everything starts marvellously improving. Things at work are getting back into order, the family is peaceful and amicable, I am on time everywhere, and everything turns out really well. All people turn kind and affable, and even the sun seems to be shining brighter))) And then, just like in a famous Russian tale: “Everything seems to be nice, but not everything is nice.” After a certain while of such a roseate state I look inside myself… and it’s empty there. How is this possible? Everything seems to be nice, while it’s empty inside. Why and when has everything gone downhill? I felt so much joy, and now, when everything is shining around, I have emptiness inside? What exactly has happened? Well, nothing special. It’s just that my despondency has changed into vanity, anger into pride, and the beaten puppy complex into a thirst for domination. I have simply returned to where I came from, and I still dance to the tune of the Animal Mind, though the Right Aspect’s funeral march has changed into the Left Aspect’s “Mendelssohn”. This is a sort of ping-pong in my consciousness.

And what about my defensive front? How could it let the enemy in so easily without even a squeak? I started to look into this. It turns out in the beginning I easily managed to repel any attacks, and now I haven’t even noticed how my fortress has fallen without firing a shot. And it’s all because I was already accustomed to negative emotions and so failed to discern the enemy behind the “positive” ones which came up to take their place. This is a sort of a Trojan horse: I opened the gate for it and took it inside myself. And I have taken this horse inside numerous times in fact, so it’s not even the horse, but rather some Trojan brick dropped))) Yet, every cloud has a silver lining. Now, when I look at such brick and its attractive appearance, I see it lying, but rather scratch the bump on my forehead and think: “No, I shall better pass by”.

Thus, an interesting understanding arose that it’s possible to go towards God only when such aspiration is NUMBER ONE always and everywhere, under any circumstances, and not just when the system has taken you down a peg.

Instead of an afterword:

A man was walking in the street at night. Another man ran towards him and shouted: “Help, rapists!” The first man looked, and that man was indeed followed by a crowd of running people. The first man got scared and started running himself. He ran with all his might and saw a well ahead. Without thinking twice he jumped into the well and heard the crowd as if passed by above. He wiped sweat from his forehead: “Thanks God, the danger’s over.” Suddenly he realized he’s not the only one in the well, and there are other people beside him. He said: “Oh, guys! Just imagine I have hardly escaped from rapists!” Suddenly a hand came down on his shoulder gently, and a soft voice said: “No, man, rapists are here, and those are beaters.”


Related articles:
So, whose are thoughts?
Stepping on the Spiritual Path
A story of meeting with Sathya Sai Baba. New experience and insights
When everything is collapsing, the only thing you can do is to erect your inner spiritual temple