Pyramids in Crimea: a sensational find or a PR campaign intended to attract attention? So far it is difficult to say, however we have collected something. The material is surely not quite ripe and requires confirmations. Who knows, perhaps they will be found?

In 1991, a unique complex of seven underground pyramids was discovered in Crimea. Their height is 45 to 52 metres, and their tops are almost at the ground level. The pyramids were found by researcher Vitaly Gokh who carried out studies in those places, searching for underground water sources. Firstly, sources and springs were found exactly where the pyramids are located. Later on, in the process of drilling a group of researchers headed by V. Gokh made an incredible discovery: they found a highly solid gypsum concrete plate. 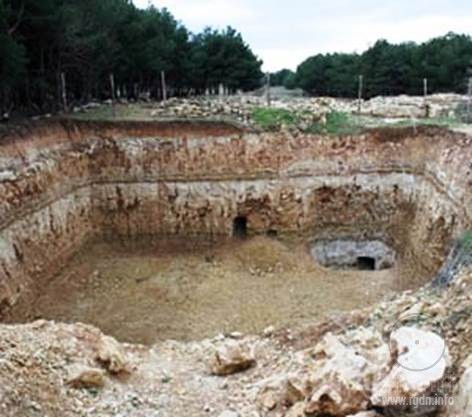 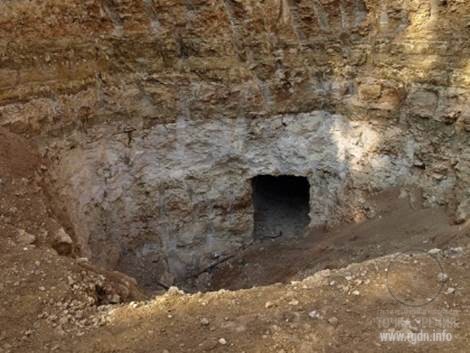 Further studies made it possible to draw staggering conclusions: that turned out to be a pyramid covered up to its top with various rocks as s result of the flood. In 2001, researchers from all over the world began to examine the pyramids of Crimea. The opinion of all of them is one: these pyramids are real and unique.

The chain of pyramidal structures of 36 to 62 metres in height could have been found by neither researchers nor inhabitants of the peninsula because they are totally hidden under the ground. Tops of the pyramids are only several metres under the ground. The approximate age of these structures is supposedly 7 to 10 thousand years.

The sought-for objects were long not found, although devices distinctly showed the presence of hollows under the ground. When it was decided to drill a shaft, it gave results already at the depth of 10 metres: the first of numerous pyramids was discovered, which is designed according to the golden ratio just like the pyramids of Egypt (the ratio of the base length to the pyramid height is 1.6).

The pyramids were scanned with various up-to-date devices, and later on other pyramids were discovered. The largest of all the pyramids found in Crimea is the one located in Ai-Petri area. 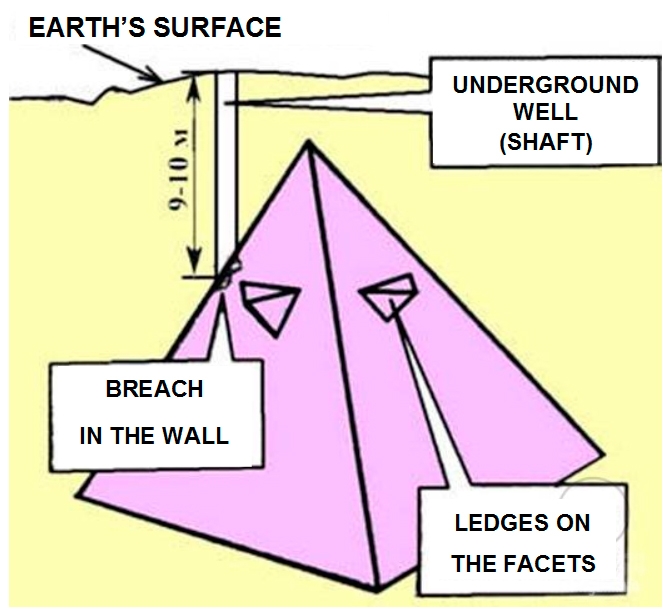 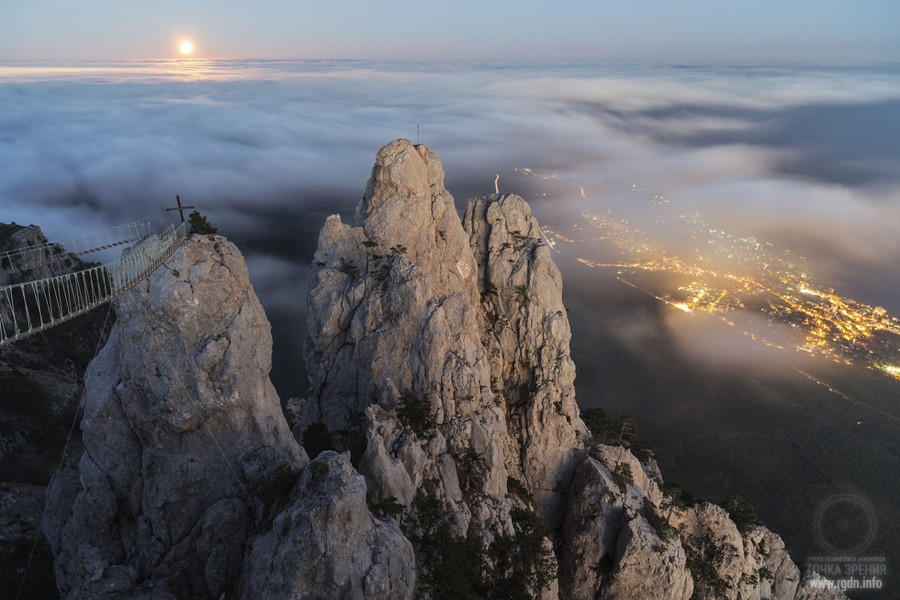 Under one of the pyramids, there is (supposedly) a Sphinx statue. It is smaller than the Great Sphinx of Giza, but accurately mimics its contours and looks towards the west.

In 2009, another discovery was also made in Mountainous Crimea: a pyramidal complex was found after application of the method of torsion impulse-dispersion responsive scanning. Unlike the pyramids found earlier, these pyramids are not underground, but located inside rock. They are made of artificially processed stone blocks. As of today, 4 pyramids have been discovered in that area. By their shape they also differ from the pyramids that had been discovered earlier: they are rounded and truncated.

All in all, 56 megalithic structures have been found in Crimea as of today, while the first pyramid was discovered in 2001. Most of Crimean pyramids are trihedral, as distinct from the tetrahedral ones in Egypt. In the layout made by researchers (see below) we can clearly see a special disposition of the Crimean pyramids. The central 56-metre pyramid is located near the village of Krasny Mak (Red Poppy). Groups of other pyramids in their turn are combined in smaller structures with pyramids in the centre. 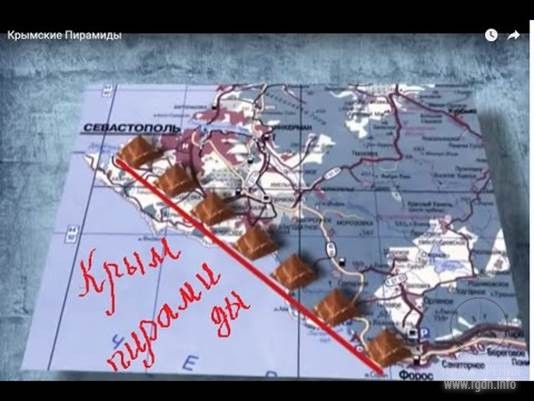 The second largest magmatic centre in Crimea is located in Batiliman-Laspi near the city of Sevastopol. The biggest concentration of the pyramids is near the villages of Krasny Mak, Schastlivoye (Happy) and Mnogorechye (Multi-River). As a rule, the pyramid tops are not deep underground – just 1 to 1.5 metres below the earth’s surface. 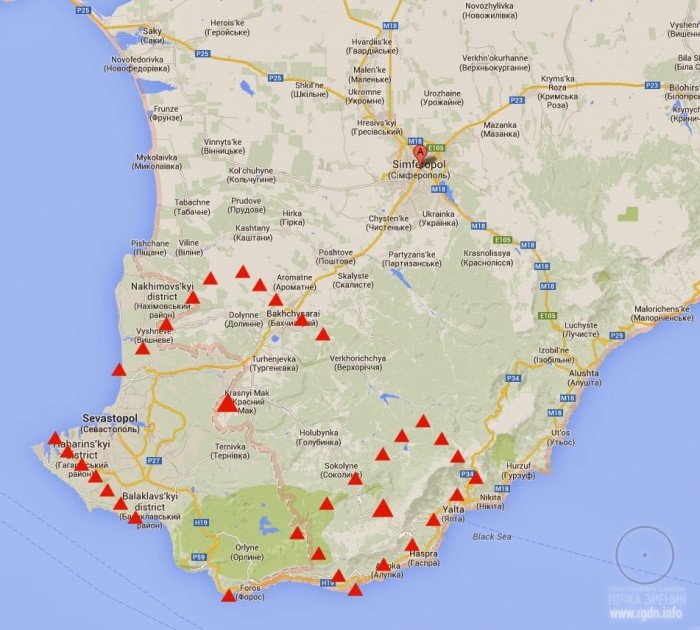 Until today, 37 pyramids have been found in Crimea in all. The researchers who made this discovery faced resistance on the side of the then Ukrainian authorities. An impression arises that studies of the pyramid phenomenon is indeed tabooed.

Pyramids of the world. Riddles of underground pyramids:

Perhaps, one of the most significant archaeological discoveries in Crimea has been the discovery of underground pyramids. Some of these structures exceed the famous Egyptian pyramids in size many times. Researchers puzzle over the purpose of these structures, but one thing is indisputable: these are artificial complexes erected by unknown beings with application of technology and knowledge that are difficult for our understanding. Enthusiastic researchers who have already discovered such structures on the peninsula assert that to all appearances some of them are in the working condition, since droning is heard under the ground, and there is a vibration that in no way may be associated with seismic activity. 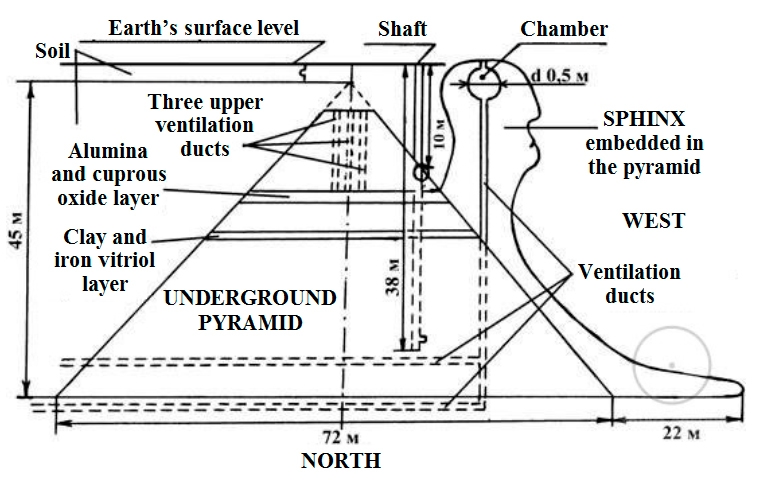 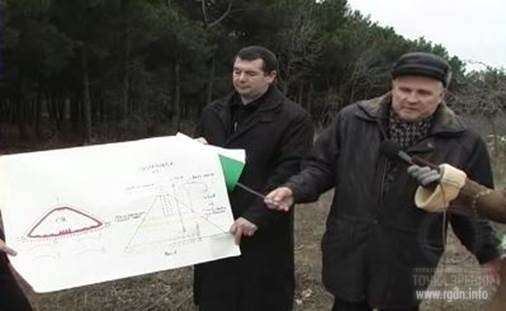 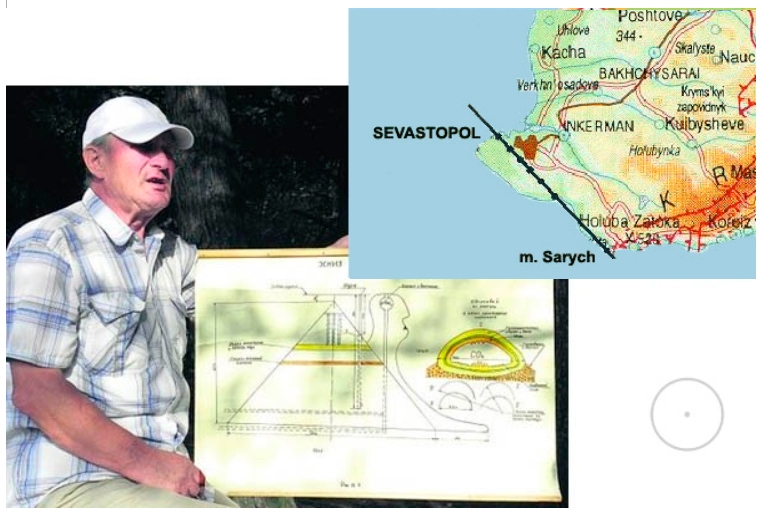 Moreover, researchers have discovered a chamber near the largest pyramid. In the chamber there is a sphinx that exceeds its Egyptian brother in size. Having performed comparative analysis of pyramid cleavages from Giza and Crimea, to their great surprise enthusiasts have revealed that pyramids from both locations are made of one and the same material.

After a certain while researchers faced another problem: all of a sudden, without explaining the reasons, Ukrainian authorities forbade any studies of Crimean pyramids. Furthermore, later on even this was not enough for them, and they ordered to concrete the shafts already drilled, and the excavation site was enclosed with barbwire.

Mass media eventually began to defame and dethrone Vitaly Gokh’s discovery in every way possible, while official authorities actively endeavoured to depreciate the role and scale of this discovery, accusing researchers of a pseudoscientific character of their works. In view of such a ballyhoo, an impression automatically arises that there is a global conspiracy and planetary-scale attempts to conceal information of this kind from the public.

According to Vitaly Gokh, “The Crimean pyramid itself, when we found it, did not look like a pyramid. In the beginning we thought it was a plain underground structure, but later on we discovered that certain energy was coming from its top towards the earth’s surface and above. It was not difficult to unravel this phenomenon – it is the so-called wave-conductor principle…” Another interesting thing is that the structure of the pyramid stones contains albumen. Hence, a conclusion may be drawn that these pyramids were built in the dinosaur age, i.e. almost 65 million years ago! Moreover, an incomprehensible structure covered with s silicate mask was discovered near the Sevastopol pyramid. It reminds a cap and is incredibly solid: the structure damped the sledgehammer blow, and no damage was caused. When researchers broke through the dome, traces of ashes and carbon dioxide were found inside.

It has been acknowledged that Crimean pyramids are located in a certain sequence:

Several kilometres away from the last location, there are two more pyramids.

All the aforesaid pyramids are situated on a single northwest-southeast line in Sevastopol area, between the Cape Khersones and the Cape Sarych along the coastline. Incidentally, on the same line there are also Stonehenge, pyramids in Tibet, and the submerged pyramids of Easter Island. 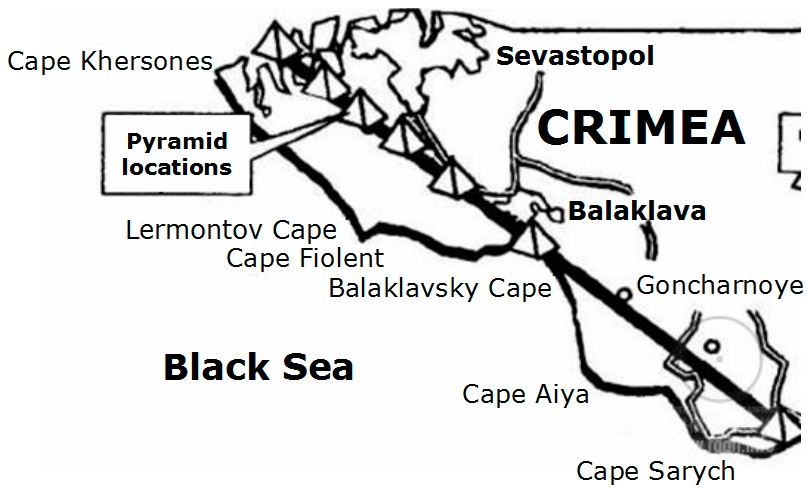 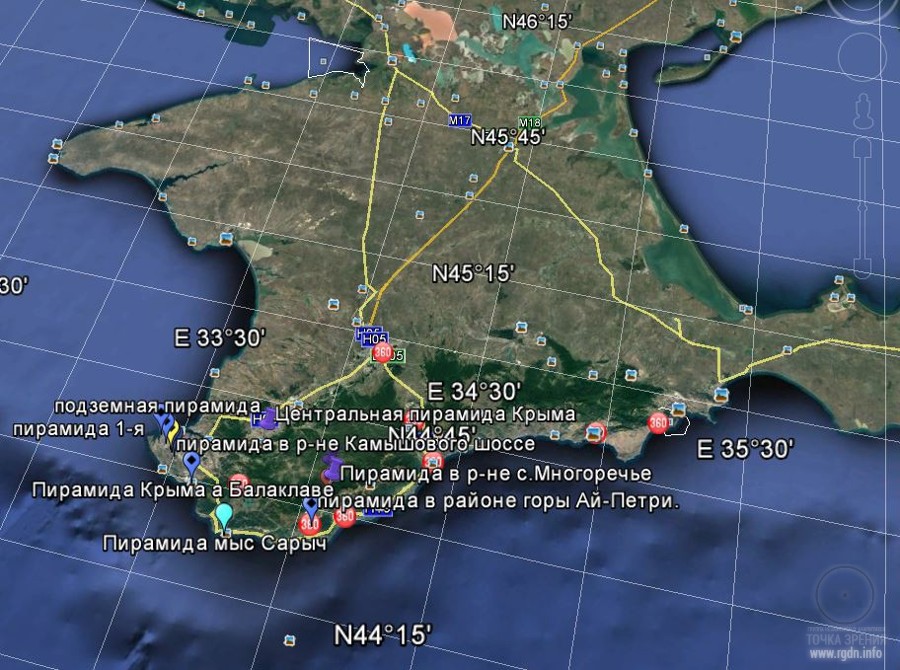 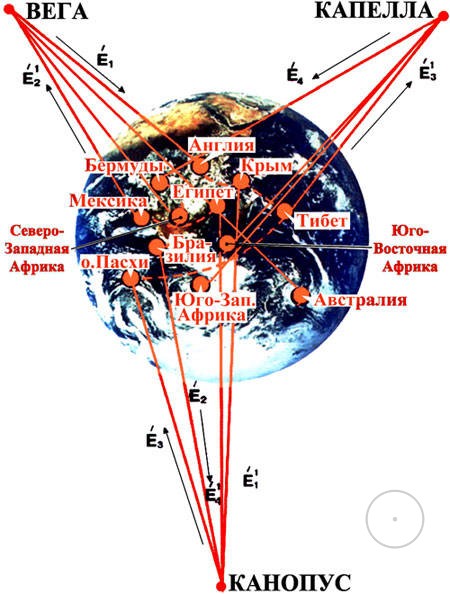 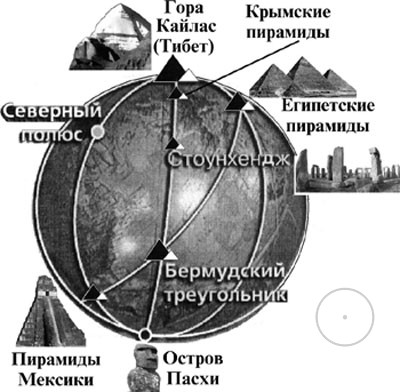 As a matter of fact, in Crimea there are also mounds, the most famous of which is the Tsar’s Mound. Details may be found here. 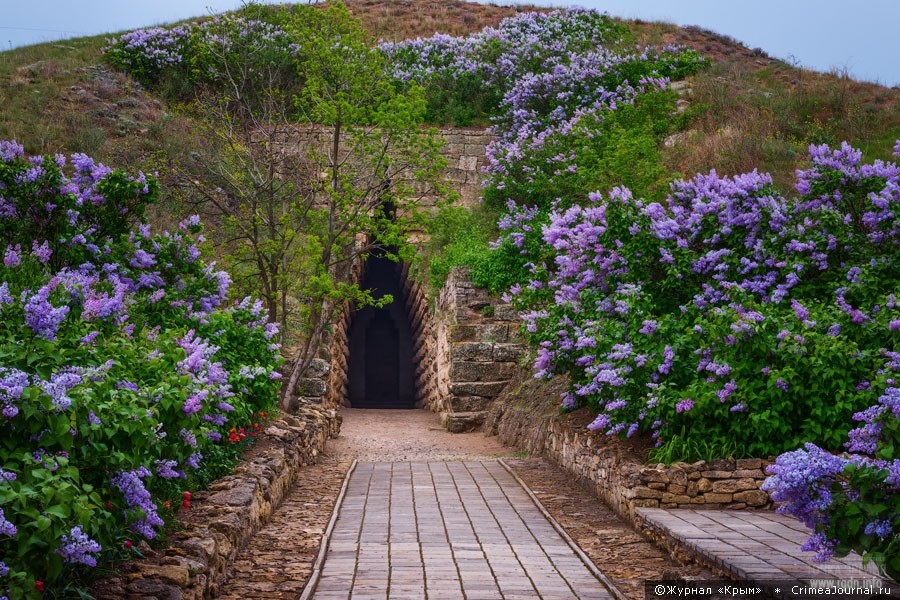 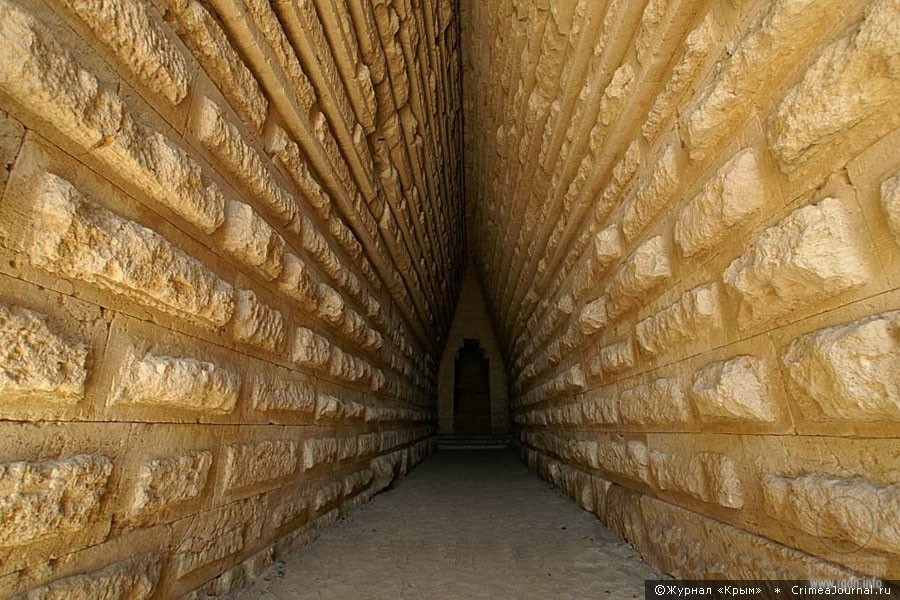 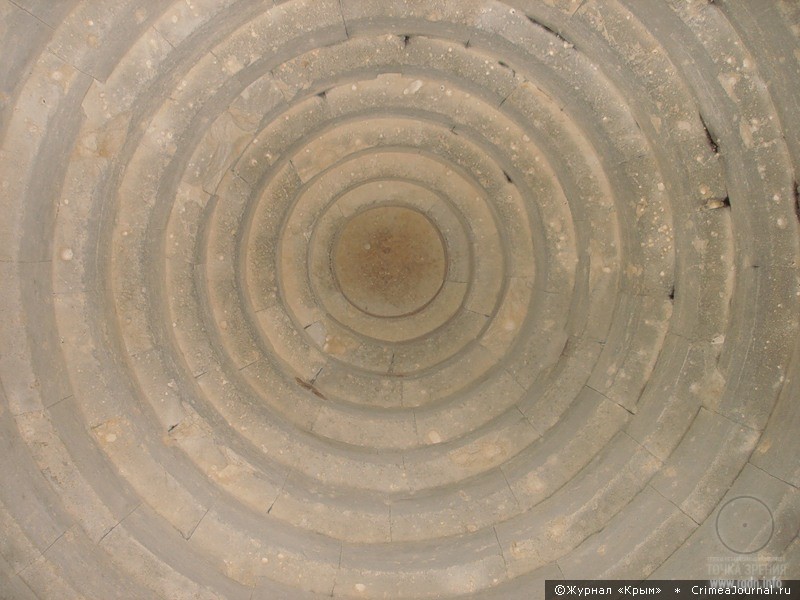 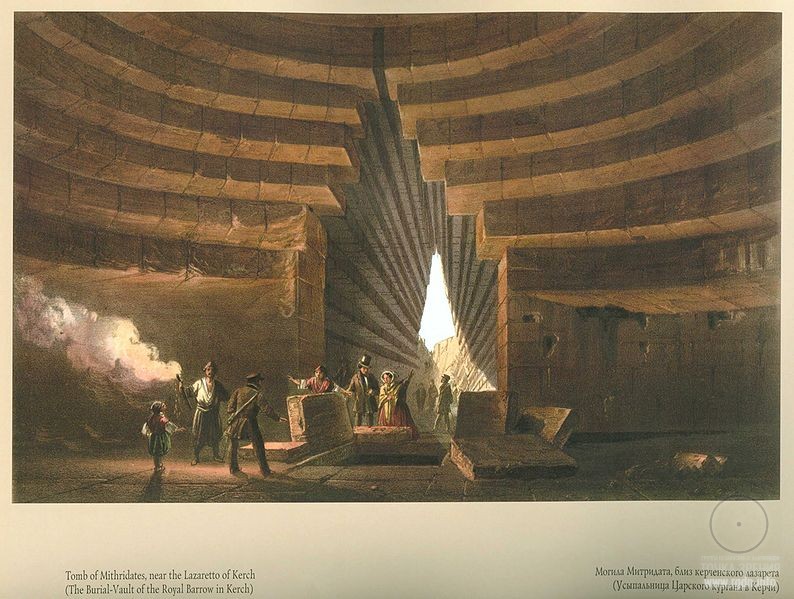 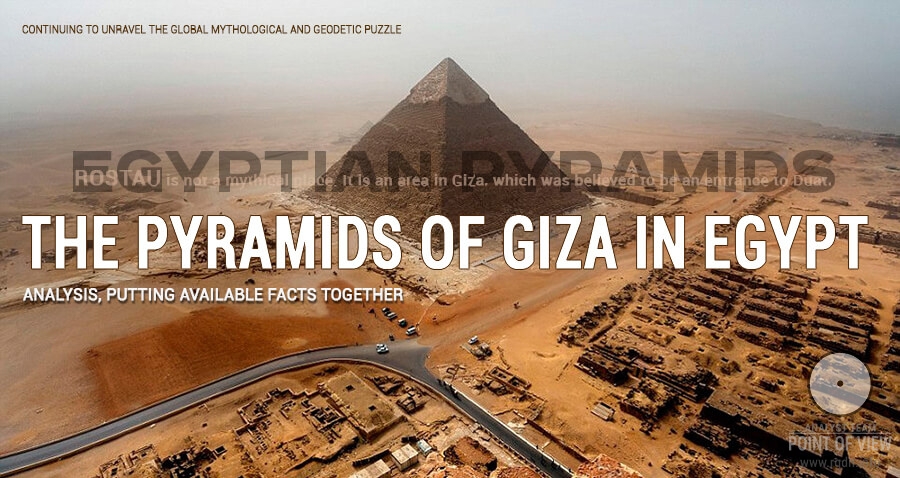 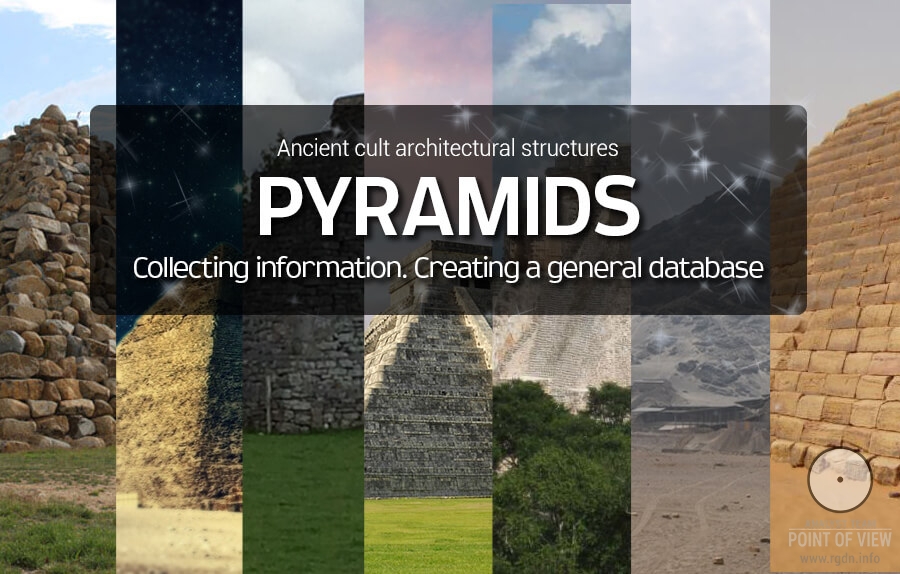