What other strange and inexplicable circumstances relate to DIA and accompanied its construction? The airport has the longest of all US public use runways – the 16R/34L runway with a length of 4,877 metres, plus five 3,658-metre runways. Just to note, the largest serial aircraft in the world AN-124 Ruslan needs a runway of 3,000+ metres. Thus, it may be concluded that DenverAirport is built so that “everything” that flies could land and lake off here. Another inexplicable detail is that about 100 million m3 of rock and ground were extracted and relocated in the course of construction from the airport site despite the fact the facility site is flat. 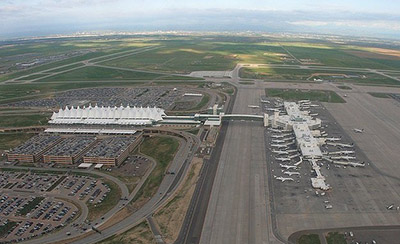 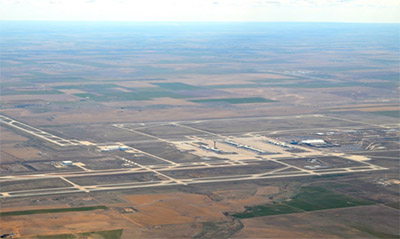 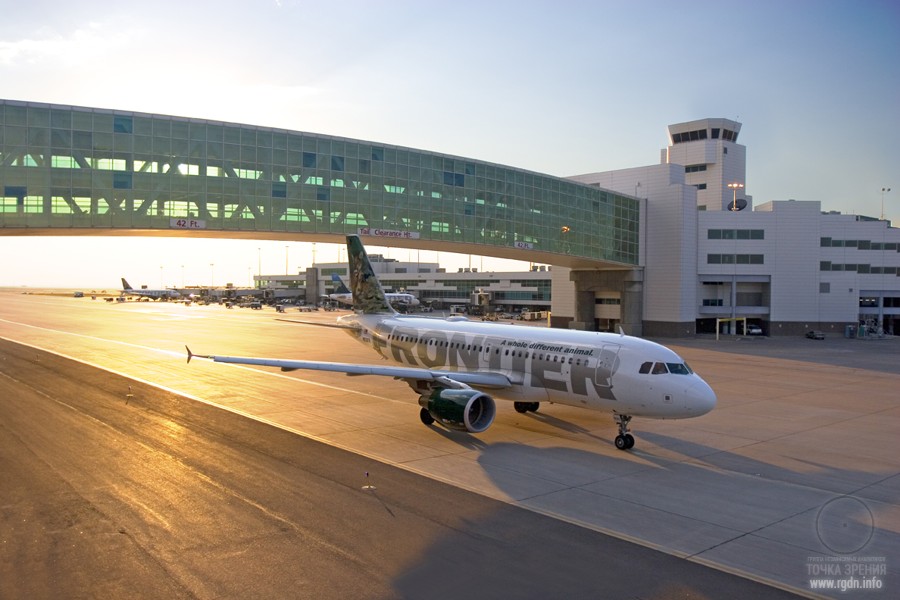 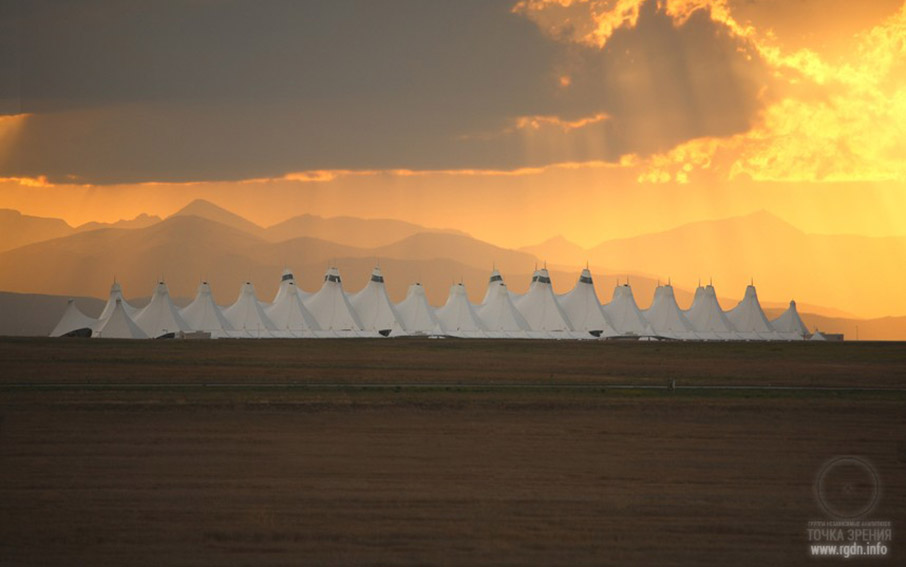 Let’s imagine the volume of 100 million m3 via a figurative example. I suggest measuring the volume by the largest cruise ship existing as of today – the Oasis of the Seas. 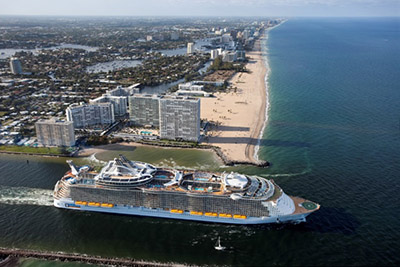 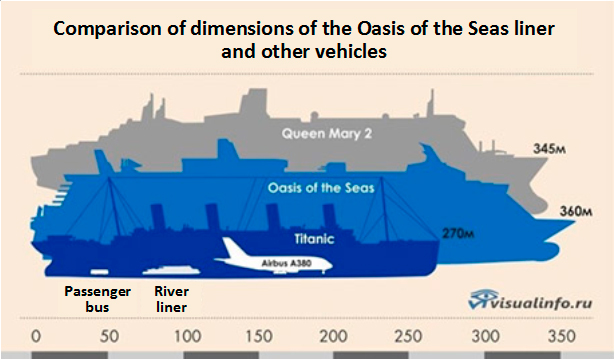 Some information about the Oasis of the Seas: it contains 2,700 cabins to host 5,400 passengers plus the crew of 2,165 people, 12 thousand plants, 42 elevators, and so on. The Oasis of the Seas liner occupies the space of about 1.3 million m3! Hence, the volume of the rock and ground extracted and relocated during the Denver Airport construction corresponds to the space occupied by 77 Oasis of the Seas cruise ships. 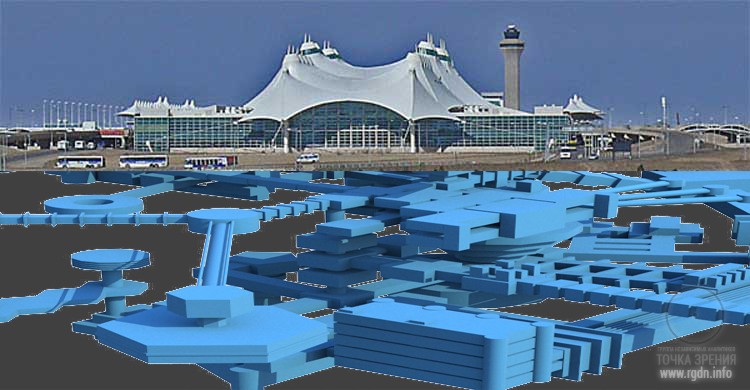 There is another detail which analysts fail to take into account while trying to understand the DIA phenomenon. Denver area is one of the highest in the United States and is situated over 1,600 meters above the sea level (see map below). Given the growing interest of the global community in the climate change, a question arises what could be a better place to ensure underground city protection from tsunamis and floods? 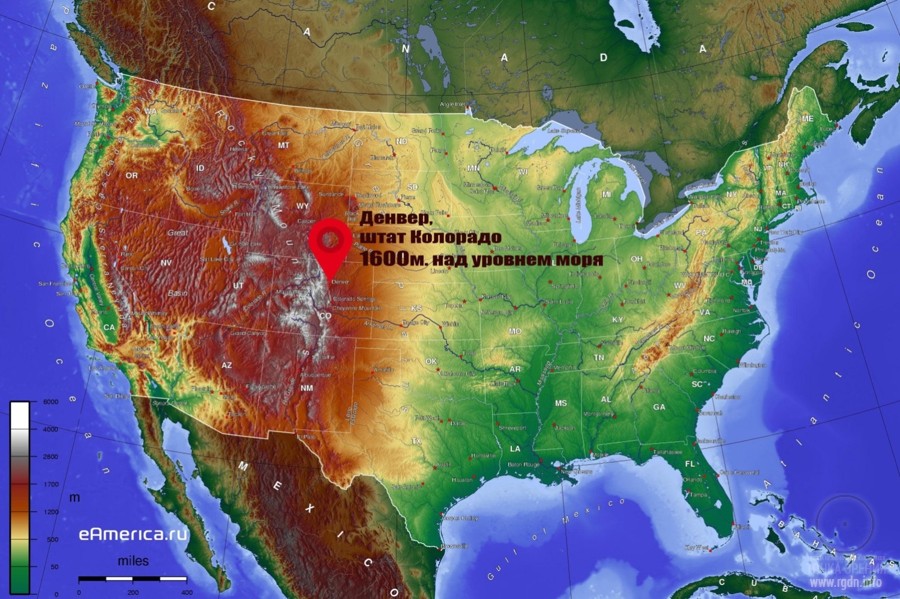 For this article we see no use to describe the enormous number of murals, enigmatic signs and inscriptions in famous and unknown languages, which may be observed on the airport walls and floors, as well as strange artifacts and sculptures located inside and outside the airport building, because everyone who desires can easily find this information on the web and form their own opinion on the sense and purpose of all that stuff. We will only present a colorful image gallery evidencing that this gigantic and mysterious facility was definitely inspired by Masons. 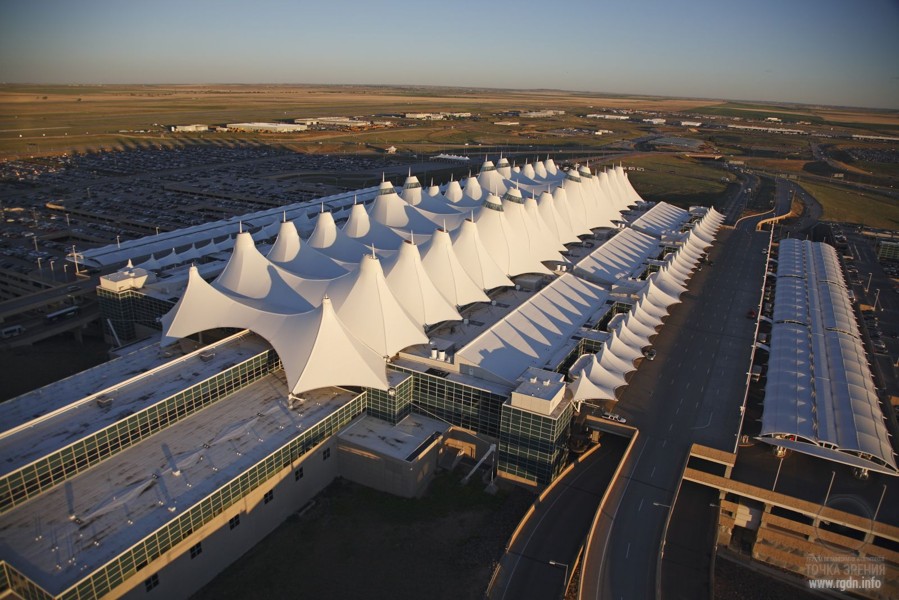 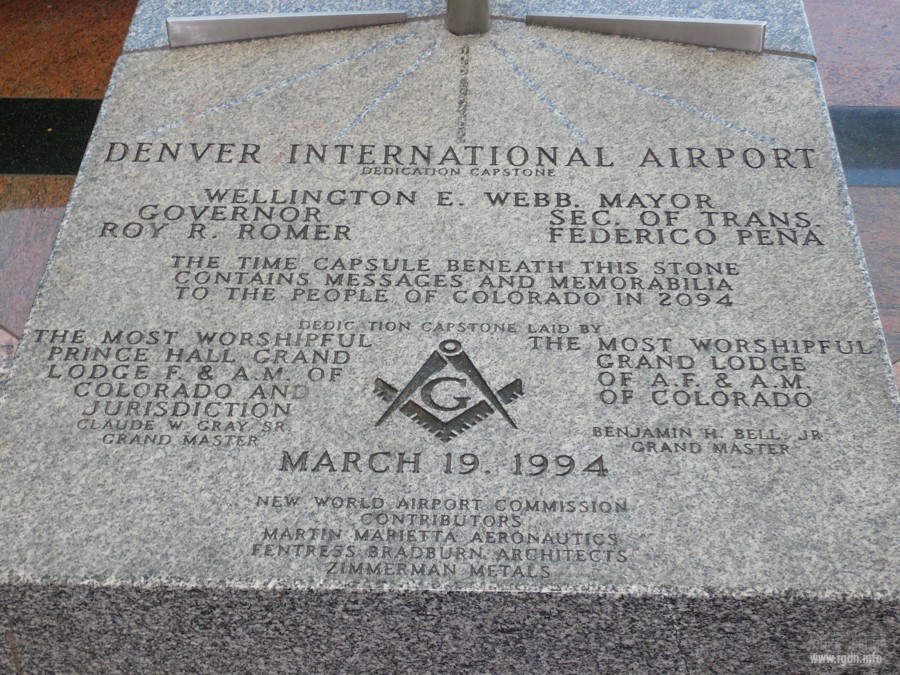 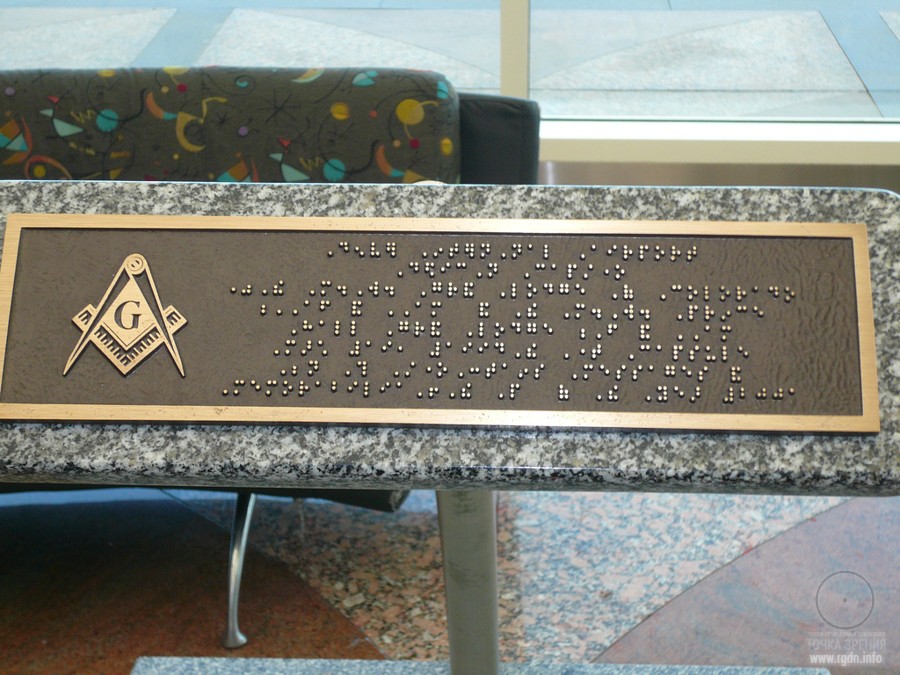 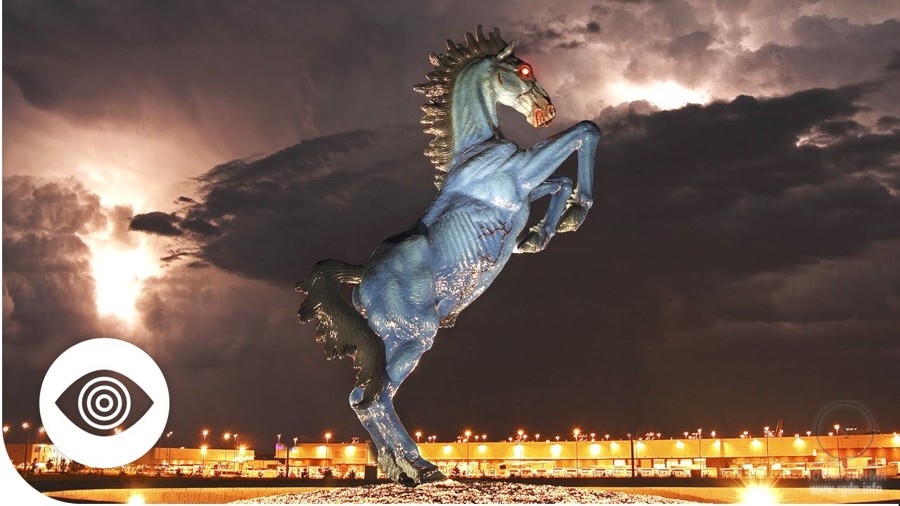 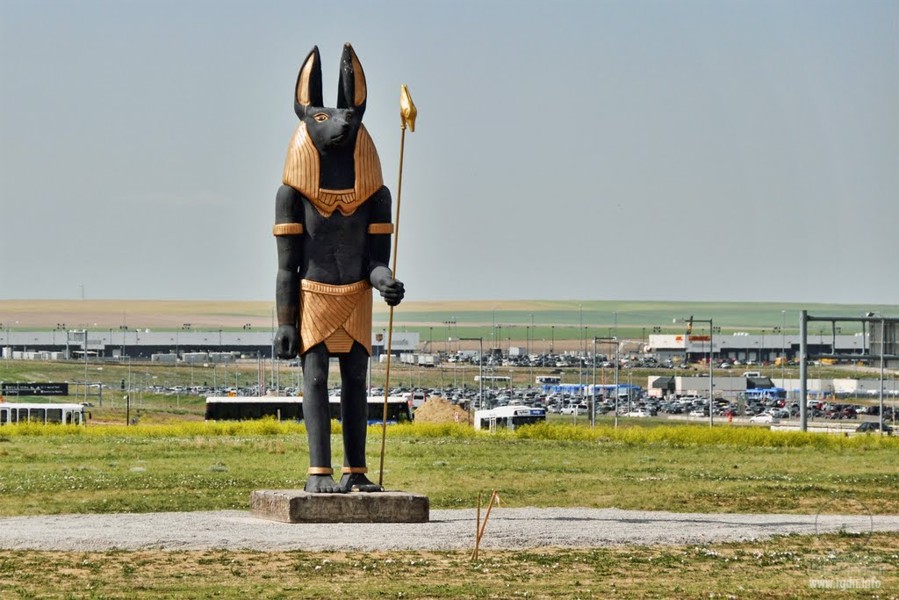 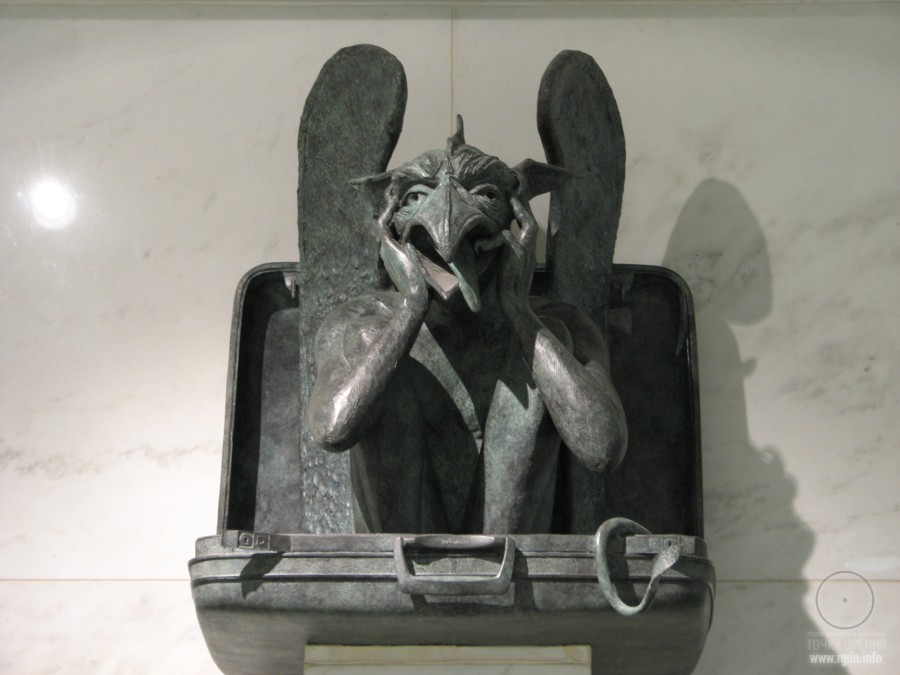 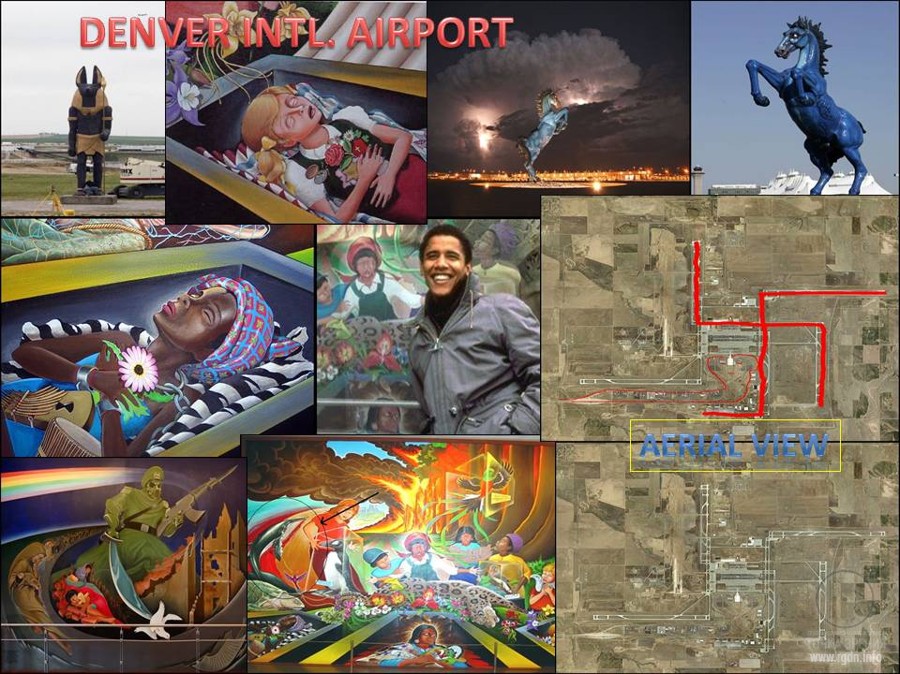 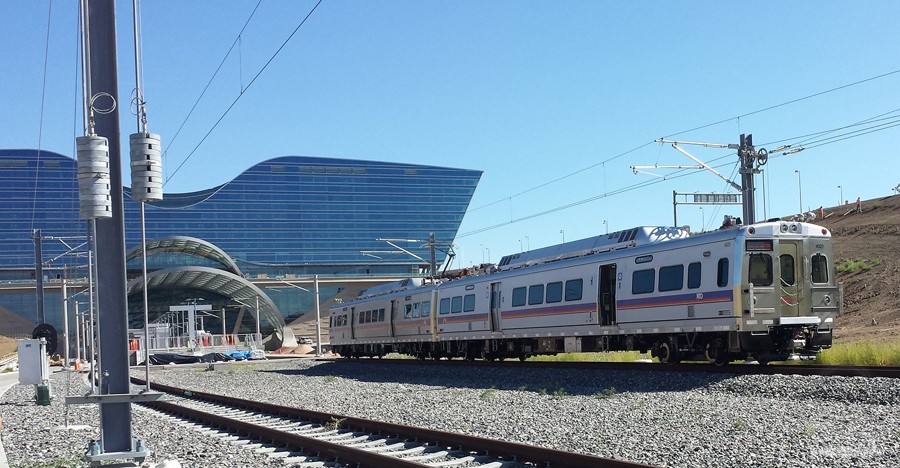 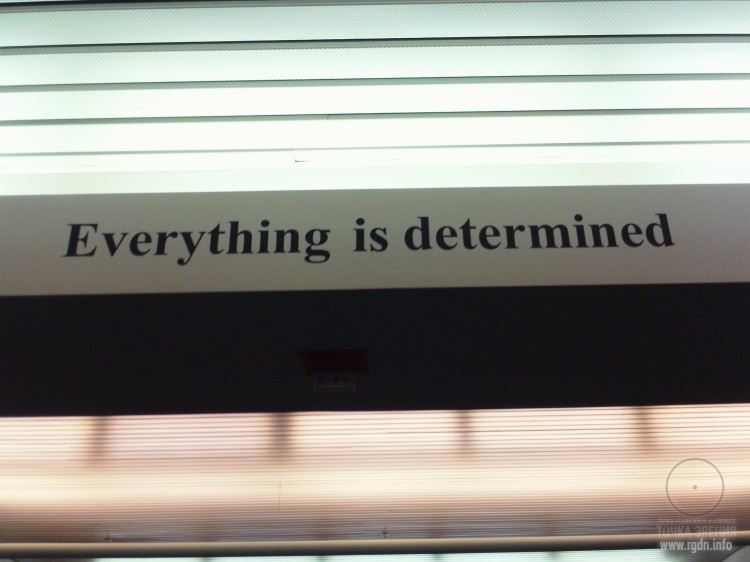 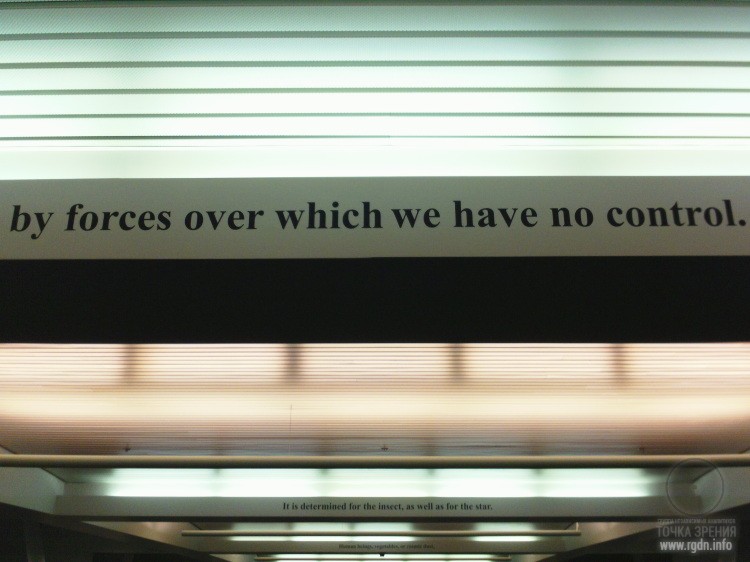 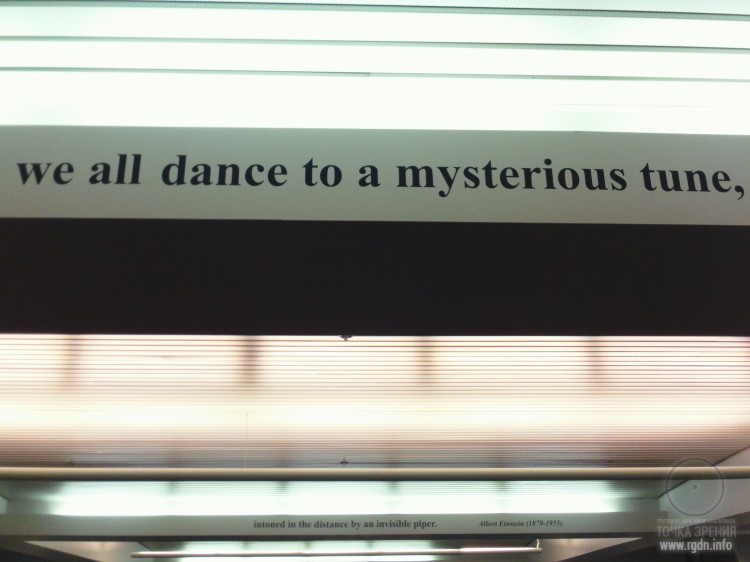 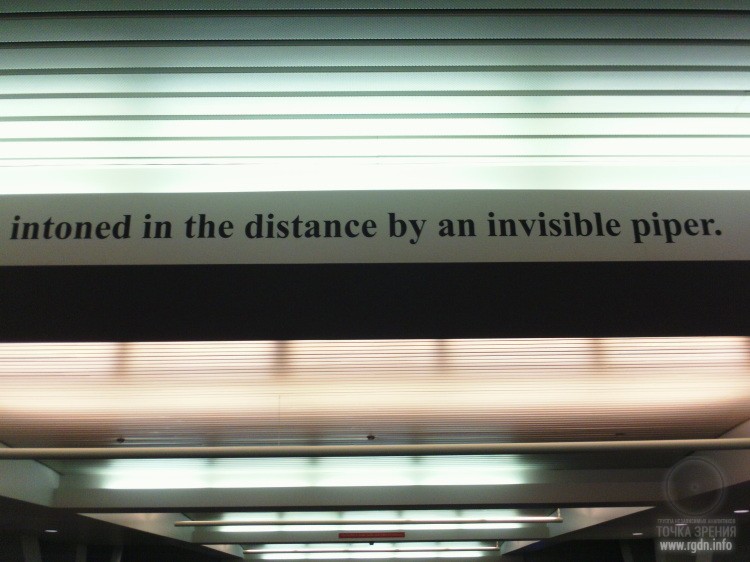 Everything is determined
by forces over which we have no control.
We all dance to a mysterious tune,
intoned in the distance by an invisible piper.

Apparently, such mirthless despairing notes should remind DenverAirport passengers of who they are and what destiny’s prepared for them by the powers that be. So, what is this Denver facility – just another airport or a secret underground city?

There are records which, in my opinion, are quite relevant and worth particular attention of all people who seek the truth about what really takes place in this world. Thus, Sensei of Shambala (Book IV) by Anastasia Novykh (may be downloaded here: http://books.allatra.org/en#sensey4) contains the following information:

...Thirdly and most importantly, they are going to finance and arrange several needless wars with some Third World countries, but with involvement of the USA as the ‘world policeman fighting for democracy in the whole world’. In these wars people will naturally lose their lives, including ordinary American guys who actually, not being aware of all underlying reasons of such wars, will think, dying, that at the cost of their lives they defend democracy and interests of their country in a foreign land. People will perish; hence, discontent among the American population will increase. Using this civil unrest, at the right moment Archons will accuse their next puppet-president of all the troubles, imputing everything to his ‘unsuccessful policy’. Simultaneously, they will try to incline their allies and people of their country to an opinion that regular wars are not effective: warfare runs into money and these wars take longer than planned (although Archons finance the opposing party as well), people lose their lives in them, and there is no sense in such situation. In other words, money and human resources are wasted, and there is no use in it. As a result a public opinion will be formed that the USA must have the right to be the first ones to deliver a nuclear blow at such ‘unfair, undemocratic’ countries that in no way fit into the Archons’ policy. An opinion will sink into people’s heads that Americans as a ‘free nation’ and ‘world power’ must have the right to deliver the first nuclear blow, since it is less expensive and, most importantly, American guys thus won’t have to die in the fight for ‘democracy in the whole world’.

Now, in order to convince people that nuclear war is necessary, they will manipulate the economy of ‘the most powerful country’, just as Archons always do. Firstly the national economy is artificially boosted; people get used to living well. Then a ‘foreign enemy’ of the country appears. At this time Archons provoke acute economic recession; a drastic economic slump is arranged. As a result many people lose their jobs. Public opinion becomes very unfriendly. Moreover, mass media persistently emphasize that the country’s main ‘enemy’ is growing rich, and ‘assumptions’ are put forward that probably this is the reason why ‘our people are getting poorer every day’. Such provocation involuntarily provokes envy, anger and a rather negative attitude of people brought up on the Animal Nature dominance towards the country that is ‘growing rich at their expense’. These assumptions of mass media eventually turn into accusations from the government which hints that all the economical troubles are because of that ‘unkind nation’. Thus, a person, being in strained circumstances – yet recalling the time when he lived well and comfortably in his ‘free prosperous country – and seeing the other country, because of which he has allegedly become poor, growing rich, sub-consciously reorients from the inner enemy to the outer one, without even thinking of why these crises in fact arise and who arranges them. In other words, citizens begin to hate ‘by default’ the country which Archons’ henchmen are pointing them to.

Now the plot thickens. They will start psychologically preparing people for the necessity of being the first to use nuclear weapons, saying it is quick and will efficiently punish the ‘undemocratic country’ because of which ‘all are getting poorer’. Thus, Archons will attempt to launch a global war, where obviously very many people will die, including those who thirsted for such ‘retribution’.”

“Thirsted? Can people be fooled that much?” Victor doubted with astonishment. “Well, let’s consider it logically, if strong nations launch a nuclear war who would then survive? What do Archons count on?”

“Yes, if this happens, most of humanity will perish... Although for quick recovery of the human population it is sufficient to leave at least one hundred thousand human individuals. And Archons know this very well. No wonder they are actively implementing the Agarty plan developed back during the World War II when a nuclear bomb became an evident reality of the near future. According to this plan, a completely autonomous city is to be built deep under the ground (designed for habitation of 144 thousand people, with due account taken of their reproduction) that would be safe enough during any cataclysms and protected from nuclear strikes.” (Sensei of Shambala – Book IV) 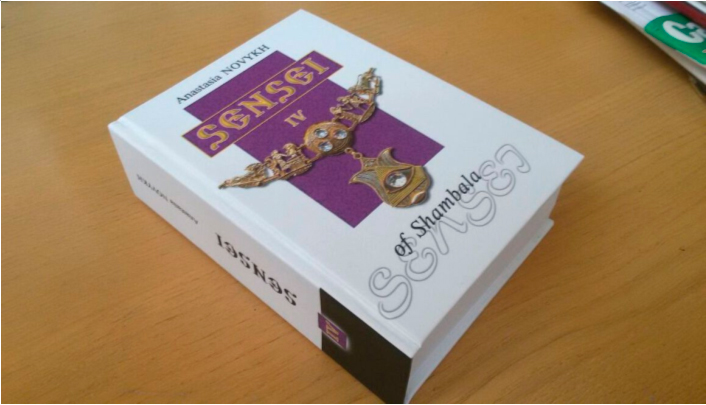 And here are extracts from the Report “On the Problems and Consequences of Global Climate Change on Earth. Effective Ways to Solve These Problems” published on 26.11.2014:

…Furthermore, to date, due to the inevitability of the impending global climate disaster, other figures are being voiced “behind the scenes”. Now they are talking about only 144,000 people “who have the right to exist on Earth”, of whom 4,000 are the world elite, 40,000 are the elite’s service staff and security, and 100,000 are slaves ensuring maximum life support of the world elite. For these purposes, entire bunkers have been built as well as underground secret cities with food reserves needed to survive during global natural cataclysms. Paradoxically enough, these underground cities can accommodate exactly a total of 144,000 people...

…Given the growing global climate change in the near future, we can openly declare that the world elite does not have enough time to implement plans on establishment of their new world order, despite all their desires and aspirations. The tool which they used for manipulation will very soon become non-functional. Accordingly, we will very soon see a collapse of their system of deception and substitutions, which united people only on paper, promising them a better future in virtual numbers... 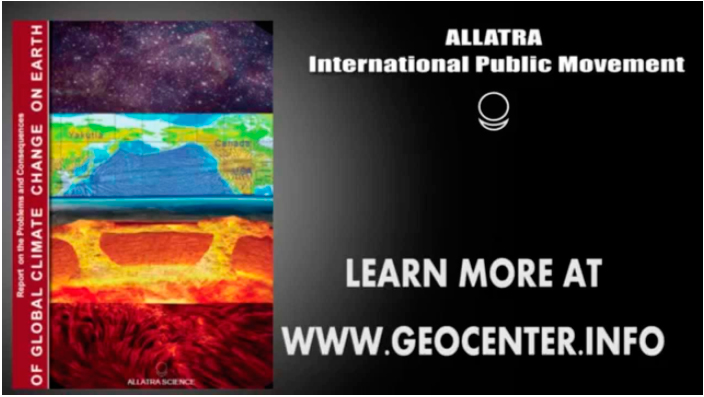 Well, I may assume with confidence that the world elite’s self-salvation plan called Agarty (Sanskrit: “invulnerable”) were already at the completion stage, but the forthcoming climatic changes on the planet have caused inevitable corrections to their plans. The world elite’s goals and attitude to humanity is generally clear. This is evidenced not only by the points touched upon in this article, but also by the wars that took place in the last century with numerous victims, the conflicts initiated across the globe in our times, the crises that ruin economies of entire nations, and the values popularized through mass media owned by the elite. Yet, this is their personal choice – the choice of a small cluster of deceived people who have got a false idea of themselves as the world rulers. However, I believe the most important question is: why billions of people on the planet choose the fate of weak-willed slaves?

In conclusion let me cite the words from the AllatRa book by A. Novykh:

“This book is not finished because the final word rests with people...” 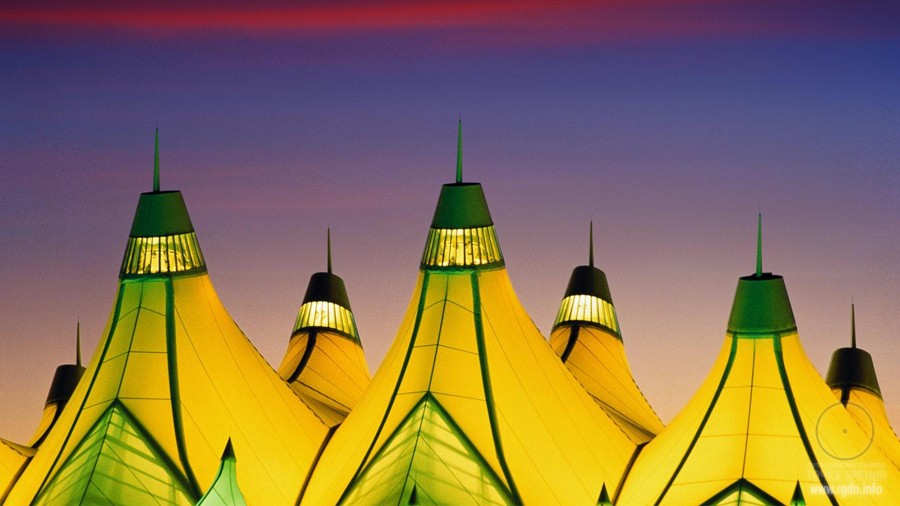 And to top it off, below there are videos for those who are interested in Masonic puzzles: