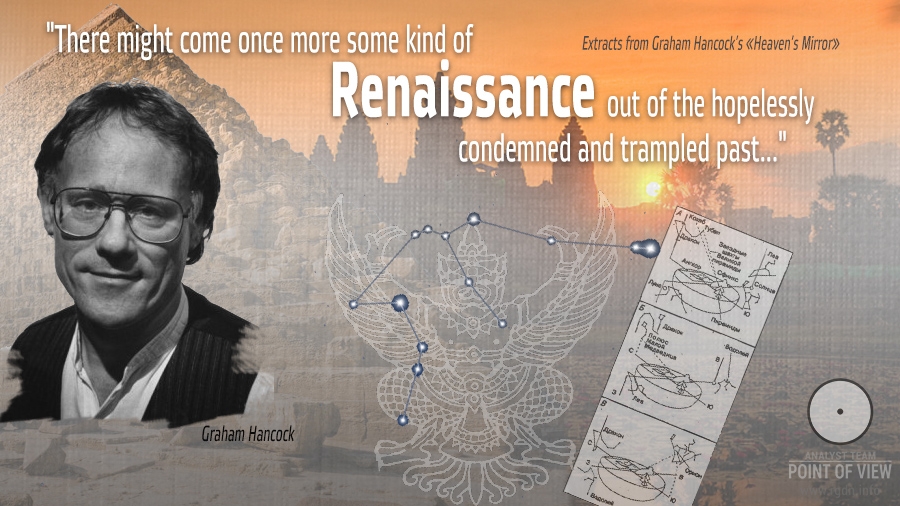 Here it is appropriate to cite a quote:

His high position gave Imhotep a real opportunity to contribute to implementation of the global architectural project narrated to him by the Sokrovennik, which project could bring an invaluable assistance to humankind of the remote future. (Anastasia Novykh. SENSEI of Shambala – Book IV)

I will present the text without commenting anything so far.

What these accounts have in common is the notion of a lost golden age, the notion of the Flood – or some other equally devastating cataclysm – as a setback in the progress of human knowledge, and the notion of a determined attempt being made, by a small group of survivors, to find ways to transmit to the future the precious wisdom of a former civilization.

That wisdom, at all times, in all places, concerned what the Gnostic Texts call ‘the object of man’s quest, the immortal discovery’. It taught that the initiate must strive to obtain ‘the life of millions of years’ – which cannot be obtained by all, nor achieved through blind faith or even through good works, but is a prize ‘that human souls may win’.

It is our conclusion that the ancient monuments and myths and scriptures that we have explored in Heaven’s Mirror are all parts of the vast apparatus of an archaic spiritual system aimed at enabling those who had proved their worth to initiate themselves into the mystery of eternal life.

We also conclude, as the Gnostic texts envisage, that there must have been some form of coherent ‘organization’ behind this system. To pick the strongest examples out of the background of other evidence that we have presented, the astonishing similarities between Giza and Angkor are hard to explain in any other way – even though these sites are separated by 8000 kilometres and almost 4000 years. More important by far, however, is the fact that both sites feature enormous monuments modelling a particular group of four constellations – Leo, Orion, Draco and Aquarius – at dawn on the spring equinox in 10,500 BC.

That we have two of those constellations modelled at Giza (Leo and Orion) and a third (Draco) at Angkor seems most unlikely to be a coincidence, particularly since each one of them is oriented to a different cardinal direction. It seems obvious that careful planning must lie behind so subtle and so extenuated a scheme – and planning is a handiwork of an organization.

Such an organization would surely want to complete its great worldwide project and therefore might be expected to build a temple somewhere on earth, at some point in history, resembling the constellation of Aquarius – the fourth constellation in the talismanic sky of 10,500 BC. To conform with the global pattern we would expect that such a temple, ‘resembling’ or ‘similar’ to Aquarius, should be oriented west – just as the Angkor complex is oriented north, the Giza pyramids south and the Great Sphinx east. We would also expect it to lie at a significant distance in degrees from Giza and Angkor, which are themselves separated by 72 degrees of longitude – the ‘ruling’ precessional number.

Aquarius and the phoenix

Might it be Tiahuanaco – which displays pronounced Aquarian characteristics in the aquatic motifs of the two great statues inside the Kalasasaya and in the water-pouring channels of the west-facing Akapana Pyramid? If so, then matters of great interest may be revealed if Oswaldo Rivera succeeds in his search for a hidden chamber.

Or might it lie in some other watery place? One area that may yet have some surprises to reveal encompasses the Gulf of Mexico, the Florida coast of the United States, and the Bahamas – in particular the shallow waters around the Bimini islands. In September 1997 we received a fax from the free-diver, Jacques Mayol, renowned as the first human being to reach the depth of 100 metres holding his breath. He told us that between 1967 and 1975 he had been part of a team of divers and archaeologists, led by Dr Manson Valentine (then the Curator of the Miami Museum of Science), who had carried out an underwater survey around Bimini. The team, said Mayol, had found ‘unexplainable vestiges of pre-cataclysmic dating… off the Bimini islands.’ He added: ‘I still have in my possession some astonishing underwater slides. For obvious reasons Dr Valentine never referred to the vestiges as possible traces of Atlantis.’

Could the fourth temple be found amongst these vestiges of a former civilization?

Or could it perhaps be that the fourth temple is meant to be built in the future, ‘when the time is right’ – in fulfilment of an ancient plan.

Imagine yourself at Giza on 21 March around the year 2000 (or indeed at any time in the past century or the next century). Imagine yourself between the paws of the Sphinx, gazing east in line with its gaze. Approximately an hour before dawn what you would observe would be the constellation of Aquarius ascending above the eastern horizon, hovering over the exact place where the sun is going to rise.

Although it was usually represented in ancient zodiacs as a man pouring water from an urn, some cultures preferred to depict Aquarius as a bird flying upward. The Romans saw the constellation variously as a peacock and as a goose. The Maya saw it as Coz, the celestial falcon. And in the 1920s the English scholar Katherine Maltwood showed that the ancient Hindus may have identified Aquarius with their mythical birdman Garuda, who had ‘the head, wings, talons and beak of an eagle and the body and limbs of a man’. 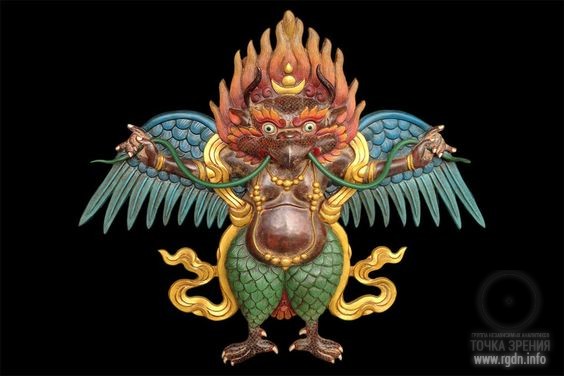 Maltwood also compared Garuda, king of the birds, to the figure of the phoenix in Egyptian and Greek mythology, pointing out that, just like the phoenix, Garuda was associated with long cycles of time (he was said to have hatched from an egg 500 years after it was laid). Moreover, the primary quality of the phoenix is immortality and Garuda is especially remembered in Indian myths for having stolen the elixir of immortality from the gods. Like the tree of life in the Garden of Eden, the myths state that the elixir was hidden from man in a place of great danger where it was surrounded by flames and protected, not by a twirling sword, but by ‘a fiercely revolving wheel, sharp-edged and brilliant’. Garuda extinguished the flames, broke the revolving wheel and flew up with the precious goblet containing the elixir of life.

Because of this escapade Garuda is frequently depicted bearing a cup filled with liquid – which seems to provide further support for the notion of a link to Aquarius ‘the water-bearer’ in modern zodiacs. Moreover, if Aquarius is Garuda and Garuda is the phoenix, then, as Matlwood goes on to point out, it is not a big additional step to see Aquarius as a stellar image of the phoenix. Indeed, it may even be represented as such in an immense zodiac of prehistoric earthworks, only visible from the air, that surrounds the English sacred city of Glastonbury.

In ancient Egyptian iconography and hieroglyphs the phoenix, ‘was born before death existed’ and symbolized the eternal return of all things and the triumph of spirit over matter. (Dato’s note: by the way, the word Kabat means ‘for the second time’, ‘recurrently’, ‘again’, if you remember.) To observe the phoenix of Aquarius rising at the equinox, as we can today, is therefore to confront a potent celestial symbol of rebirth.

Since what happens below was believed to be determined by what happens above, it is legitimate to ask: is something to be born again?

An hour before dawn on the spring equinox in 10,500 BC Leo lay where Aquarius lies today and Aquarius was setting. In AD 2000 the reverse is true with Aquarius rising and Leo setting. 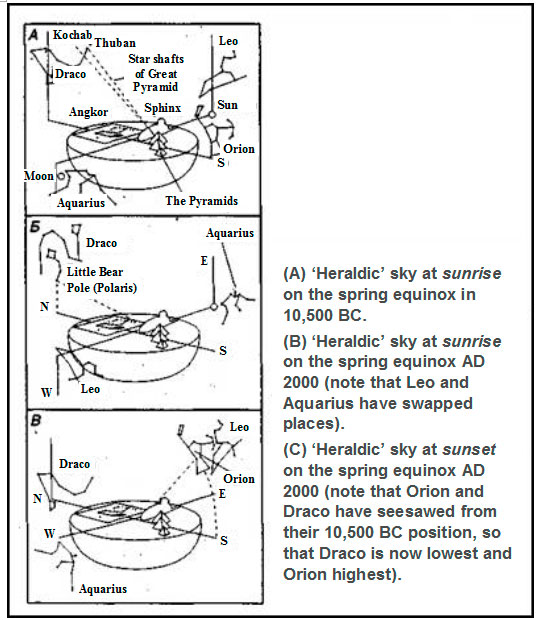 In other words precisely the same constellations, but with everything flipped 180 degrees, are present in these two skies separated by 12,500 years.

Perhaps that sky – we repeat that precession has not significantly altered its appearance throughout the entire twentieth century – has already been taken as a signal for the construction of the ‘fourth temple’. Perhaps the prehistoric cult of immortality which used vast monuments linked to constellations and astronomical cycles as instruments of initiation is coming back to life. Today as never before, travellers to Giza and Angkor find themselves amongst thronging crowds enraptured with the mystery of these places. The same is also true of the Mexican temples and pyramids, of the colossi of Easter Island, of the Nazca lines in Peru – where the pilgrims now gaze down from aerial chariots – and of Cuzco, Ollantaytambo and Tiahuanaco in the high Andes.

Poised on the edge of a millennium, at the end of a century of unparalleled wickedness and bloodshed in which greed has flourished, humanity faces a stark choice between matter and spirit – the darkness and the light. Modern religions, like modern science, have let us down, offering us no nourishment or guidance. Perhaps our only hope, as wise scholars long ago recognised, is that:

there might come once more some kind of ‘Renaissance’ out of the hopelessly condemned and trampled past, when certain ideas come to life again, and we should not deprive our grandchildren of a last chance at the heritage of the highest and farthest-off times.

(The end of Heaven’s Mirror by Graham Hancock) 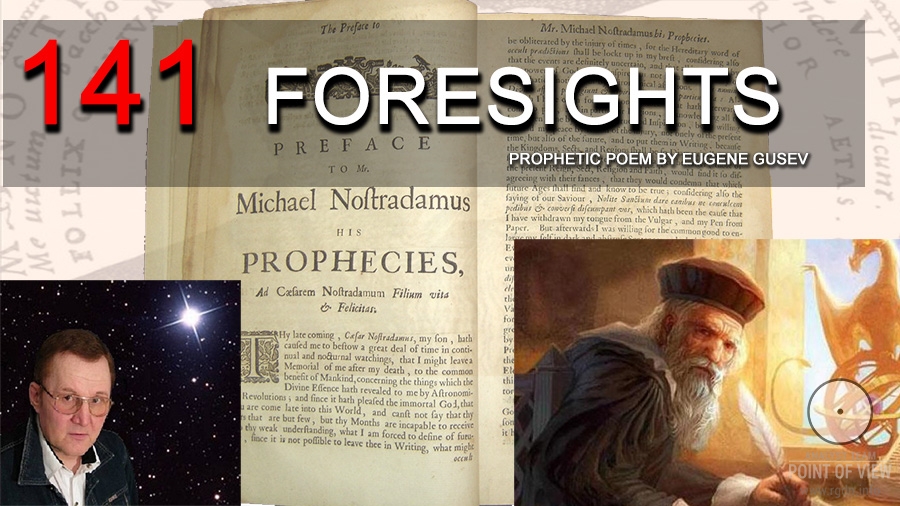